Review of The Tears We Never Cried by Ryshia Kennie

Welcome to the book blast tour for The Tears We Never Cried by Ryshia Kennie. I felt compelled to take a review stop on this tour because I lost my own mother to Alzheimer's last year. My full thoughts are down below, as well as an excerpt from the book. You can find even more if you follow the tour. 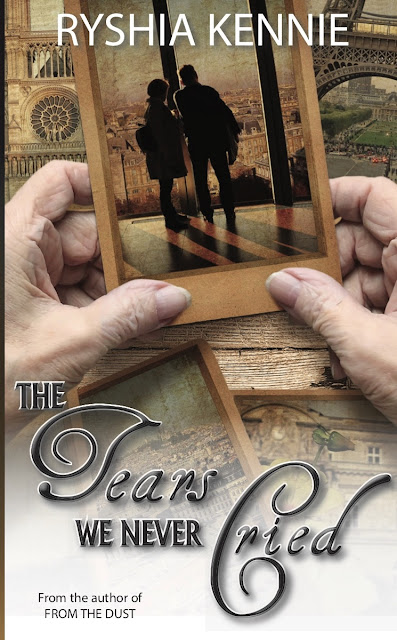 The Tears We Never Cried

A mother’s tragic diagnosis.
A daughter’s life on hold.
An ending and a new beginning ...

Cassandra McDowall’s mother has been forgetful for a while, but she never anticipated rapid-onset Alzheimer’s to come out of nowhere and shake their world to its very core.

As Cassie puts her already-lackluster life on hold, her mom’s indomitable will and spirit of adventure prove to be a handful.

And as her mother fades, the two embark on one last adventure—a journey that reveals secrets on the brink of being lost, the joy of foreign sunsets, and love where she hadn’t thought it possible.

“The car is stolen!”

Mother’s voice sliced through the swirls of sleep.

I leapt out of bed, glanced at the clock and tripped over the unfamiliar flannel sheet. On the wall was a poster of a rock band I’d loved at fifteen. I was back in the room of my childhood.

I’d brought Mother home to live with me for that first night after the Christmas card debacle. One night was about all either of us could tolerate. My apartment was too small. It had taken me only a few days to get my stuff together, notify my landlord and move in with Mother.

“Hang on, Mom.” I fought to catch my breath as I reached for my housecoat.

“Cassie!” Her voice cracked across the layer of frost that collected on the window frame overnight and slammed through the partially open window. I have a penchant for fresh air. Sleeping with a window open even in the midst of winter is normal for me, and made it easy to hear Mother’s shriek outside as it erupted a second time loud enough to roust the neighbors. Her screech had me excited but not panicked. Not until my conscious and my unconscious married those two thoughts together—outside and Mother.

**My thoughts**
My friends thought I was crazy when I said I was going to read and review this book. "Are you sure you want to do that to yourself?" "Protect yourself while you read that. I can't believe you're going to." It has nothing to do with the book itself, per se. It's because I just lost my own mother a year ago to Alzheimer's and am a very, very emotional person.

Honestly, I had a harder time with Cassie's friend being named Russ Thomas, because I just lost a work acquaintance and friend's husband a few months ago who was actually named Russ Thomas. So that was weird to read repeatedly through the book.

As for the story of Cassie and her mother Jess, it was pretty real. Every experience that they had together triggered a memory of my own with my mother: the supposedly stolen car, the denial that anything is wrong, the wandering, the constantly picking up trash, the tantrums, the slipping away. Fundamentally, I think any of us who have dealt with a parent with Alzheimer's is going to recognize those situations with our own personal twist. In a way, it makes you part of an exclusive club that none of us wants to join.

I think for us, though, the difference was we had much less denial about our mother's condition than Cassie does. We had been through it with other family members (her mother) and it was a much slower decline. Our roadblocks were more getting the professionals to actually listen to us that something was wrong. But I know so many more people go through a lot more of that denial. I've helped friends through it. And my mother started showing signs 15 years before she passed. She was in a memory care facility for seven years.

I admire Cassie for taking her mother on vacation to Cuba. Traveling with an adult with dementia is so difficult. I kept thinking of taking my mother 45 minutes away to a football game in Ann Arbor for one day, and that was hard enough. I also admire her for moving in with her mother to be her caregiver. I personally think she held on too long in her stubbornness to do it all herself. But again, each family is different. And when Mom hit that point, we knew none of us could do it anymore. Each situation is different. But the author does a great job showing how exhausting it is to be a caregiver and presents options for finding help.

Normally I would have a read a book this length in one evening, or possibly spread out over two. But because of the emotional aspect, I knew I had to break it up into smaller chunks and read it over several days, interspersing it with other, lighter stories. And there is more to this story, including a budding romance and Cassie finding out some family secrets. But I admit I was focused more on the Alzheimer's story and her relationship with her mother.

You know that this was written by someone who has intimate experience with a close loved one who was taken away from this disease. Others can come close to capturing the emotions involved, but only a person who has really been there is going to be able to convey all of it in such a familiar way. I am surprised that I didn't cry, but I think it's more because it is the holiday season and I have been a bit more numb. Two months ago or two months from now, it could have been a different story. I think most people reading it are going to need a tissue. I honestly had to just sit for half an hour and just let my thoughts wander as I let it all wash over me. And I know I'll be lost in thought for a while. That's part of the reason my review is a little long and maybe a little rambling.

I truly give kudos to the author for reaching deep within and writing this story. It's the kind of story that I hope to write some day. It gave me comfort to know that I was not alone in my experience. I already knew that intellectually, but I really felt it while reading this. I hope others who have dealt with a parent with Alzheimer's can read this and find comfort in it. And those who have not had that experience perhaps can find a new level of sympathy for friends going through this. Thank you to the author for writing this.

The winner of her city’s writing award, Ryshia Kennie’s novels have taken her characters from the depression era prairies in her first book “From the Dust” to a across the globe and back again. There’s never a lack of places to set a story as the too long prairie winters occasionally find her with travel journal in hand seeking adventure on foreign shores. While facing off a Monitor Lizard before breakfast or running through the Kasbah chased by an enraged Water Carrier aren’t normal travel experiences and might never find a place in one of her stories, they do make great travel stories. When not collecting odd memories from around the world, she’s writing mainly romantic suspense and women’s fiction.

The author is giving away a $15 Amazon/BN gift card via Rafflecopter during the tour.