What you may not know about Branden LaNette, author of Once Upon a Time Bitches #OUATB

When you're following your favorite authors online, you often get to know them somewhat through their posts and the persona that they put forth. But there's always something that you don't know and may be surprised to know. Today, author Branden LaNette is doing a little true confessions even beyond what she reveals in her book Once Upon a Time Bitches. Enjoy an excerpt as well and then follow the tour to learn even more!

It’s hard to say things that people don’t know about you after putting yourself in a vulnerable spot and sharing so many private things as I did in the book. I went deep! So, to share more means I have to dig deeper. I want people to know that making a dream come true doesn’t mean there isn’t any more struggle, it doesn’t mean that it’s always easy for me to wake up every day and love the reflection staring back at me, it doesn’t mean that I don’t have to face tough situations.

I still get stuck. I still have doubt. I still question what comes next.

What I don’t do is give up.

That’s something I think is important for people to know. The journey never, ever gets easier. It gets different and you have to keep getting better There is not anyone out there, posting about a perfect life that’s telling the truth.

There is no such thing. At every level, I would think: “this is it. I can coast now” and that’s not what happens. So, I encourage you not to give up, those setbacks are necessary to make you stronger, and to appreciate every step of an incredible journey. I want people to remember that we are all human. 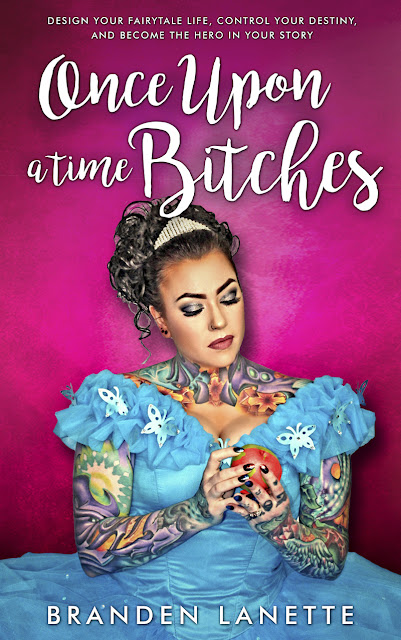 Once Upon a Time Bitches

However, besides being a wife, mom to six kids (plus others with fur), coach and business owner, Branden is the author of the new book, Once Upon a Time, Bitches. It’s a fast paced, in your face, expletive laced, nothing held back message to women everywhere: There is no magic fairytale, but if YOU work at it enough you can come pretty close to creating your version with a happily ever after.

But first, no more whining and no more damsel locked in a tower, bullsh*t. Is it possible to design a fairytale life? Control your destiny? Be the hero in your story? Branden thinks there is and she wants to help you.

Success is different for everyone, clearly. Right now, with an 8-month-old baby in my arms as I type this, I define success as getting clothes onto both of us.

Success doesn’t have anything to do with your bank account, either. So don't think you can’t speak up in a meeting or approach someone with a business idea just because you think they’re “more successful” than you are. Fantastic Fran may be making $1 million per year and you’ve only got only $47.22 in the bank.

Your idea could be worth $10 million, maybe more, who knows? You’ll never know unless you speak up and take a chance.

Success also has nothing to do with followers, likes or clicks. And it sure as fuck isn’t about approval from friends and family.

Move the f on with that sh*t.

Success isn’t ANYTHING anyone else tells you it is. It’s what you tell yourself it is. Which ultimately means that, if you’re taking my advice, you should ignore everything I just said success is and/or isn’t because, in the end, only you can define what in the fuck success is for you. Only you.

Don’t let me or anyone else define what makes you happy. Your inner feelings define what success is, and your smile describes it to the world.

I know I’m a success because I have everything I’ve ever wanted, saggy boobs and all. I could do without some of the cellulite, but now we’re just nitpicking.

Branden LaNette doesn’t look like a typical author but she has long ignored what she “should” do, say and look like. On her own at a very young age, Branden eventually found herself with the wrong guy, the wrong job, and a bleak future. The fairytale she was promised as a child never materialized.

Finally, Branden decided that she wanted something different for her life, and realized no one was going to do it for her. Prince charming wasn’t coming to save her—she’d have to save herself.

Step by step, decision by decision, through major trials and tribulations that would stop most people in their tracks, Branden learned how to turn heartbreak into happiness and self-judgement into inner joy.

Today, Branden LaNette is an entrepreneur, coach, speaker, wife, and stay-at-home Mom to six C-section babies (ages 1-16) and way too many f-ing pets. Somehow, however, she manages to juggle all of this effortlessly (a blatant lie) while pushing her way through the kinds of fear and self-doubts that whisper within all of us (totally true) to achieve her goals. Her most recent dream come true is this book, one that is destined to have a major impact on millions of women across the globe (or at least nine people in Michigan.)

Through it all, she has found her happiness, her joy, and more importantly, her voice.

Branden LaNette will be awarding a $50 Amazon or Barnes and Noble GC to a randomly drawn winner via rafflecopter during the tour.