'A Hero for Holly' Book Tour and Review 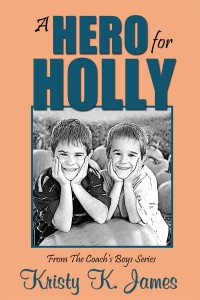 Book Blurb:
A Hero For Holly by  Kristy K. James (clean romance) Digital format only
Single mom, Holly McGinty, has no life.  No personal life, that is.  After her husband left her pregnant, with a four-year old son, there was never much time for her.  Between raising two boys and saving her restaurant from bankruptcy, she's been too busy taking care of everyone and everything to give much thought to her own needs.   In fact, the highlight of her week is swooning over her oldest son's sexy scout leader.
Sam Jensen never believed in love at first sight...until the first time he saw Holly.  But even though he gets along great with kids, and is successful as both an architect and investor, figuring out relationships with women has never come easy to him.  Now it seems as though his luck has changed.  As long as one little tiny secret remains a secret.
My thoughts:
The love story between Holly and Sam was cute. Neither one of them is sure about how to proceed with starting a relationship, so they do waste a lot of time. People who think that only teenagers get silly in love are wrong; so do adults. I found the journey that they took as they grew into being together to be more emotionally familiar and realistic than others I have read. This book is a "clean romance," which means you don't have to worry about a lot of sex getting in the way of the story.
I was also able to appreciate the setting of the story, as I grew up on the Michigan/Ohio line.
There is an element of danger that creeps up throughout the book. One storyline randomly pops up here and there and seems to get lost. Another one almost seems to come from out of nowhere, yet isn't completely surprising. Sam does end up being a hero, in more ways than one.
While this books stands on its own as a story, it does also allude to The Daddy Pact, another book in this series. You're given enough background information in A Hero for Holly to not have to read it. For 99-cents, though, I think I may also pick up that one.
About the Author:
All it took was the encouragement of a student teacher in a ninth grade writing class and Kristy K. James was off and running. She has been writing for more years than she'll ever admit to, and loves every aspect of it. From creating characters who are so real that they sometimes take over the writing when they don't like where she's taking a story, to adding as many twists and mysteries to her plots as she can get away with.

She is the author of Reluctant Guardian, A Fine Mess, and The Stranger in my Head.

Kristy currently lives in Michigan with her family, too many pets and the occasional spider. She spends her time living in her make-believe worlds, cooking and baking up a storm, and doing her best to learn to say 'no' when stray animals wander into her large country yard.

Reading is one of her favorite pastimes, as is traveling around the state, especially to coastal beaches to enjoy the sound of the waves crashing on the shore and gulls screeching overhead.
Posted by Andi at 12:05 PM
Labels: clean romance, Lightning Book Tours, romance