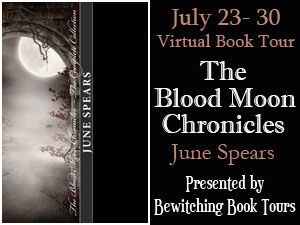 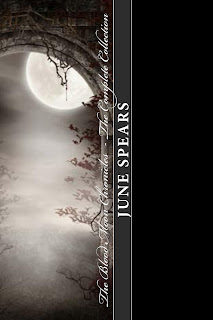 The Blood Moon Chronicles
By June Spears
The Blood Moon Chronicles (The Complete Collection)
Genre: Fantasy, Paranormal Romance
ASIN: B008H4OGBA
Number of pages: 127
Purchase Links: Paperback | Kindle
Book Description:
Three young warriors, one of them with royal blood, will be born into the human race as natural enemies. They must overcome their differences to unite and bring light back into darkness. For there is no light without darkness, and there is no darkness without light.
However, victory does not come without a price.
Short Excerpt from The Blood Moon Chronicles
A raven-haired teenager sat there, carefree , on the warm damp sand. She stared off across the water, her back to the forest. To the casual observer, she’d seem like a normal teenage girl.
To Everit, however, she was a rare diamond waiting to be polished. The wind caressed her skin sending her hair blowing with its breeze, the scent of roses engulfed the forest. Everit closed his eyes and let the scent of her take him to a faraway place. He imagined her in a magical field, and the only thing that
covered her were the black and red rose petals that fell all around her beautiful body. Her simple beauty was unlike anything he had seen in all his years. Her body tensed, about to turn, so he dashed into the woods. He could not show himself to her. Not now. Not like this.
He was sent here to plant his seed, to fulfill the prophecy of the Dark Islands. He had not planned on falling in love, but the connection he felt was too strong to ignore. The imprint she left on his heart was stronger than his desire to remain indifferent could sustain.
Everit had watched her for weeks now. He knew his feelings for her complicated things, but he knew what he was sent here for. He could not fail his people. Loving her made leaving her behind that much harder.
He made an oath to himself to find a way to protect her at a distance, even if it meant his own death. 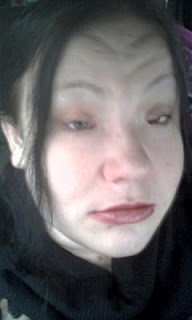 Author Bio:
Born and raised in Atlanta, Georgia, June E Spears had spent her early years writing mostly poems and school songs. However, she could not escape the allure of storytelling and quickly began studying to become a novelist. She began by reading every chance she had. Mostly Fantasy and Romance novels, June's love of writing was uncontrollable. Once she began typing, she never stopped.