Review of 'Campaign Promises' A Novella 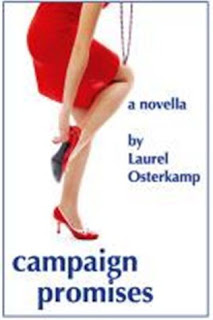 I am a member of several blog tour groups. A request came across my email to participate in a tour for the upcoming book November Surprise by Laurel Osterkamp. The blurb mentioned it had a liberal slant. I typically don't like to read about politics, but this companion novella Campaign Promises was free on Amazon. I figured I could check it out.

Because it was a novella, it was a quick read. To say that the story has a liberal slant is a complete understatement. The main character, Lucy, is a hard core Democrat. She weaves stories and commentary throughout every aspect of her life, from 1989 until 2009. Sometimes as you are reading her story, you wonder why on earth the political commentary is being dropped in. Then, it completely relates to her current situation. For example, she goes on for a page or so about Michelle Bachmann and relates the superficiality to one of the girls with whom she had gone to high school. It actually works and makes sense.

The novella touches on a 20-year span, focusing on her relationships with two brothers over the years. In the beginning, the characters are in high school, and I felt like the author really captured their voice. As the years go on and the characters mature and develop, I feel like her voice did the same.

I will say that I did not feel particularly attached to Lucy. She puts up a tough shield, not wanting to let in anyone. That goes for the readers, as well, though the story is told through her in first-person narrative. I was still compelled to read through her story, though, and I want to know more about what is going to happen. I also felt like I was missing a lot of information, though each chapter tried to give you a little background information as to what had happened over the past several years. This was enough to whet my appetite for the full novel, which I believe is due out in August 2012.