In anticipation of H.P. Mallory's latest Jolie Wilkins book, The Witch Is Back, being released on Tuesday, July 31st, I am finally reading the entire series. I love it so much that I am going to gift one lucky winner an ecopy of the newest book on the day it comes out. Check out Book #3 in the series and remember to enter the Rafflecopter below! 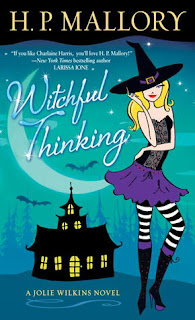 Witchful Thinking
Blurb from Amazon:
Jolie thinks she’s seen it all, but life continues to spring surprises. The latest shocker? She’s just been crowned Queen of the Underworld. Jolie may possess a rare gift for reanimating the dead, but she doesn’t know the first thing about governing disparate factions of supernatural creatures. She can barely maintain order in her own chaotic personal life, which is heading into a romantic tailspin.

First there’s sexy warlock Rand, the love of her life, from whom Jolie is hiding a devastating secret. Then there’s Sinjin, a darkly seductive vampire and Jolie’s sworn protector—though others suspect he harbors ulterior motives. As the two polar opposite yet magnetic men vie for Jolie’s affection, she must keep her wits about her to balance affairs of state and affairs of her heart. Overwhelmed, under pressure, and longing for love, Jolie decides it’s time to take charge—and show everyone that this queen won’t take jack.

My thoughts:
If you have been reading this series the whole way through, this installment is a little difficult to read for the first third, or so. There are a lot of flashbacks, many taken directly from the earlier books, to explain various situations that occur. You have to keep in mind, though, that this appears to be the first book in the series that was published by Bantam Books. H.P. Mallory had been an indie author. When she had so much success, she eventually went to traditional publishing and has never looked back. This is the second book that I have noticed as being printed by Bantam. (The first was the ebook novella Be Witched.) So, chances are that many readers are new to the series and would have no idea what had transpired in the first couple of books.

I say keep plugging through the reruns and you will not be disappointed. Rand continues to be absolutely frustrating in both love and lust. He is still terrified to give in to his true feelings for Jolie. He is also vehemently opposed to a monarchy. Now that Jolie is Queen, that is posing some serious problems for them.

Jolie continues to be almost defiantly independent in this book, a world of growth and change since we first met her a couple of years ago. She continues to discover new powers within herself. She even discovers a few secrets that you don't quite see coming. She also naively trusts everyone, which is endearing, yet frightening in some ways. Despite all of the warnings given to her, that trust ends up backfiring on her, leaving one helluva cliffhanger. Fans are desperate to get their hands on the next novel, to find out what happens! (I've already started reading it, because I was lucky enough to get an eARC from NetGalley.) This series is truly addictive!