'Be Witched' Review and Giveaway

Be Witched is the third installment of the Jolie Wilkins series by bestselling author H.P. Mallory. This one is a novella. Check out my review and enter below for your own ecopy of the latest book in the series, The Witch Is Back, due out on July 31st. 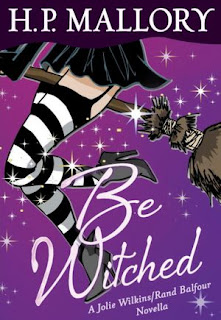 In this sexy and spellbinding original short story, available exclusively as an eBook, bestselling author H. P. Mallory presents the exciting Underworld from a never-before-seen point of view—through the eyes of Rand Balfour, a drop-dead gorgeous warlock and the love of Jolie Wilkins’s life.

While the undead wage a brutal civil war, Rand Balfour has only one thing on his mind: protecting his true love, Jolie Wilkins, the savvy and spirited witch whose powers have made her the toast—and target—of the new Underworld order.

For Rand, keeping Jolie safe means guarding against allies and enemies alike. First there’s Sinjin Sinclair, a dangerously seductive vampire who has his fangs set on Jolie, and who Rand suspects of harboring a sinister agenda. Then there are the factions of supernatural creatures causing chaos at every turn. But most shocking is Rand himself, whose wild desire for Jolie may put her very life at risk. Torn between his duty and his passion, Rand must summon all his strength to withstand temptation, even if it costs him the one woman he cannot bear to lose.

My thoughts:
Be Witched is a novella, which means it is longer than a short story, but not quite a full-length book. In this installment in the series, we read a familiar tale - the first two books in the series. Only this time, they are told from Rand's point-of-view. H.P. Mallory took critical events from the first two books and gave us the other side of the story. You learn more about Rand and why he is so frustratingly distant from Jolie, despite being madly in love with her.  You better understand his hatred for Sinjin. You also see Jolie through his eyes.

It is quite short and sometimes it is weird to read the same story from another point-of-view. But for 99-cents, it was okay by me. It helped to keep the momentum going as I made my way through the series and kept me entertained for a bit on a summer's afternoon.

This also appears to be the first publication of the series by Bantam Books. H.P. Mallory had been an indie author for quite some time, before turning to traditional publishing. That may also explain some of the repetition involved.