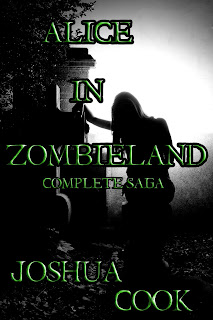 'AiZ: Alice in Zombieland' takes place in a world that is much like our own. The sky and water are blue just as the grass is green. Every day, people are going about their business, most just trying to make ends meet. Politicians still get on the television and lie to cameras and the good people of the world.

This world has one stark difference from our own – the living, and talking, dead. This is not an apocalyptic scene of destruction and despair (yet!), but hope for the living is dwindling with every waking moment.

William Lohman, a recently deceased man, held an interview that was seen by the entire world. In this interview, he told of how the largest pharmaceutical company in the world, Roslun Global, has been conducting secret experiments meant to revive the dead, among other atrocities. Mr. Lohman was taken quite seriously seeing as how he was obviously one of these experiments, what with the decay and all.

This interview knocked over the first domino in a long series of setbacks for Roslun Global, and the company’s greedy CEO Richard Roslun. Richard was not known for being subtle or calm, but he was known for getting results…at any cost.

Nine years has passed since that historic interview changed the world forever. People have learned to live with the idea of zombies, much the same way they learn to live with many modern diseases; it’s a terrible thing, but it doesn’t affect them. Until it does, that is.

Georgia ‘Gee’ Marie is a typical college student. She enjoys reading and hanging out with her friends, smoking a little weed and going to work. Her life is pretty mundane, until she returns one day to visit her father. Gee finds her younger sister being attacked by her mother, who has just finished feasting on the rest of the family. Gee and Alice are about to begin the greatest trials of their lives. Not only will their will to survive be tested, but the bonds that hold them together as family and loved ones will be pushed to their limits.

Gee and Alice are not the only ones to be affected by the terrible actions of Richard Roslun. Sam Ashe and his fiancée, Heather Young, have just moved to a nice neighborhood in Seattle. Their new neighborhood is beautifully manicured, right down to the last tree lining the street. This area was chosen for its aesthetics, but also for its safety. According to several of Sam’s favorite zombie reporting sites, a very low number of incidents have been reported here.

This is why Sam is caught off guard one night after an intense gaming session when he sees a shambling zombie. Thinking of his love, he heads off to save Heather from the inevitable zombie outbreak about to occur. Their path is not an easy one, and again, human emotions will be stretched to the limit. If you have ever been in love, and I mean true love, then Sam and Heather’s tale will grab you by the heartstrings and never let go.

I was intrigued to read this book, simply after reading the teaser called The Boy Who Cried Zombie. I am not a fan of zombies, in any way, shape, or form. I find them absolutely disgusting. Yet I liked this book. It is well-written and not nearly as gory as one would imagine a zombie book to be. Especially after all of the recent news about people eating other people's faces, I admit that I was relieved, despite my strong stomach.

Instead of a bunch of episodes of flesh-eating creatures, this book actually had a storyline. It follows two strangers who end up joining together to avenge their loved ones and to save one special young girl, named Alice. Each chapter reads like a mini-episode. The first part of the book focuses on their individual stories. The second part of the book focuses more on Alice and the conspiracy. The two parts blend together well, to tell one big story. I felt like it ended pretty abruptly, but that is leaving it open for potential sequels.

I have to admit that I also started to wonder what I would ever do, should a random zombie epidemic ever happen. Thanks, Josh, I've never done that before.

So, this zombie-hater has been converted, at least for one book (and series, should it continue).

About the author, Joshua Cook:

"Writing has always been my passion in life. It has always been a hobby to me though. Thanks to some unfortunate luck in my life, I am now able to focus full time on my writing, and this is the result of the fruit of that labor." ~Joshua Cook

Joshua Cook was born in Kenosha, Wisconsin, late in 1977. This where he spent most of his life. There have been short bursts throughout his life where he has spread his wild oats to other parts of the United States, though.

Briefly Josh lived in Arizona and a brief - dark - time in Indiana and Ohio. Finally he landed in Washington state. He now calls Seattle his home where he lives with his beautiful cocker spaniel - black lab mix, Sam Dogg.

This is where he created the growing fan favorite web site ZombieACRES.com, which spawned its first comic in October 2011. After many years of writing non-fiction, news, and various other articles, Josh decided to poke around in fiction - and is loving it.

Get your limited paperback edition today!


Today is the official start of the pre-order of AiZ: Alice in Zombieland (Complete Saga) in paperback. Two versions of this special book are now available for purchase: the limited edition (less than 100) version and the regular paperback version. Stop by http://ZombieACRES.com/ and order your copies today before they're all gone.

Zombie A.C.R.E.S. http://zombieacres.com
Your one stop site for free zombie stories, cool zombie merch, hot undead comics, and so much more.
Check out these sample pages from the comic section in the limited edition: 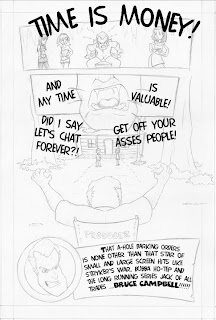 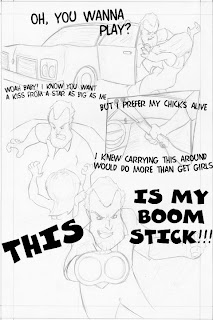