Review of 'Fire Burn and Cauldron Bubble' and Giveaway

H.P. Mallory's latest book in the Jolie Wilkins series, The Witch Is Back, is due out at the end of the month. I was lucky enough to receive an ARC of it. Leading up to its official release, I am going to review each of the books in the series. I am also offering up a free ecopy of the new book to one lucky reader! All you have to do is enter the Rafflecopter at the bottom of the review posts for the Jolie Wilkins series. Happy reading and good luck! 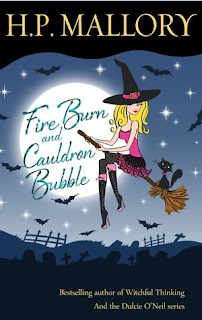 Book Blurb from Amazon: A self-deprecating witch with the unique ability to reanimate the dead. A dangerously handsome warlock torn between being her boss and her would-be lover. A six hundred year old English vampire with his own agenda; one that includes an appetite for witches. The Underworld in a state of chaos. Let the games begin. Life isn’t bad for psychic Jolie Wilkins. True, she doesn’t have a love life to speak of, but she has a cute house in the suburbs of Los Angeles, a cat and a quirky best friend. Enter Rand Balfour, a sinfully attractive warlock who insists she’s a witch and who just might turn her life upside down. Rand hires her to help him solve a mystery regarding the death of his client who also happens to be a ghost. Jolie not only uncovers the cause of the ghost’s demise but, in the process, she brings him back to life! Word of Jolie’s incredible ability to bring back the dead spreads like wildfire, putting her at the top of the Underworld’s most wanted list. Consequently, she finds herself at the center of a custody battle between a villainous witch, a dangerous but oh-so-sexy vampire, and her warlock boss, Rand.

My thoughts:
I fell madly in love with Jolie Wilkins from the opening pages of this book. She is smart and sassy, yet somewhat insecure in her own skin. She hasn't been on a date in ages. (She sounds like a lot of people I know!) She has this strange knack to read people's futures - some of the time. When a ghost enters her little business, her entire world changes. She finds out that she is really a witch. She is capable of bringing people back to life. And now all of the men in the Underworld want her. Women want to *be* her, or at least control her life. She is caught in this comical battle between two super sexy men and one crazy woman. She is totally the kind of girl you want for your best friend. You feel all of her pain and embarrassment. You long to feel the same devotion that she gets from Trent, Rand and Sinjin. You don't envy her tough decisions and having to rediscover who she is. You want to root for her the entire time.
This book has hot romance, undying devotion between best friends, werewolves, vampires, warlocks and witches. It's a blend of so many different things, yet is intriguing chick lit. I read most of it in one sitting, because I just couldn't tear myself away. I downloaded this first book in the series for free for my Kindle, but had no problem jumping back on Amazon to pay for the rest of the series.

Follow the blog to read reviews on the rest of the series. Remember to enter the Rafflecopter below to win your very own copy of the latest installment in the series, the day it comes out!