'The Witch Is Back' Review and Giveaway

Yay! The wait is almost over, H.P. Mallory fans! Her latest book The Witch Is Back is being released in a few short hours, on July 31st. I was lucky enough to procure an eARC from NetGalley to read and review. Below you will find my thoughts on the latest installment in the series. You also can enter to win your own ecopy of the book when it comes out! I am giving one away to one lucky reader. Happy reading and good luck! 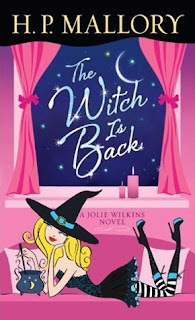 The Witch Is Back
Book Blurb from Amazon:  Funny and feisty witch Jolie Wilkins is back—or rather, she’s back to her humble beginnings. Propelled into the past to her old Los Angeles fortune-telling shop, Jolie has no idea she possesses extraordinary powers, and she definitely doesn’t remember becoming Queen of the Underworld. But at least she has two incredibly sexy men vying for her affection: Rand Balfour, who looks very familiar, though Jolie can’t place his gorgeous face, and Sinjin Sinclair, who is tall, dark, and perfect . . . except for the fangs.

Yet despite her steamy love life, Jolie can’t shake the sense that something is not quite right—like she’s stuck in a déjà vu gone terribly awry. As both men race against time—and each other—to win Jolie’s heart, the fate of the Underworld hangs in the balance. And Jolie’s decision can either restore order or create an absolute, drop-dead disaster.

My thoughts:
When I opened up this book, I was thrown for a loop. Jolie is back in the United States, working as a fortune teller. Oh yeah, Sinjin went back in time. He is determined to screw up everything in the future by meeting Jolie first and making her fall in love with *him* and not Rand. Anyone who was ever on Team Sinjin better change their mind after reading this one! That vampire has only power and sex on his mind! He is just playing Jolie, I tell you! She's just too darn nice!

I was so aggravated by his shenanigans that I was often heard exclaiming out loud, startling the various furry kids and embarrassing myself. The pages kept flipping by in my anxiety over how successful Sinjin would be in his endeavors and whether or not Rand was going to even care enough to try to fix things.

Remember, this is a younger Jolie than we have ever met before. She was a quiet girl with some self-esteem issues when we met her in Fire Burn and Cauldron Bubble. She hasn't yet had the experiences that made her so much more independent. You almost wince at how easily swayed she is, because you have gotten used to her stubborn nature. It's hard to read this time travel bit, because the outcome could be so different than what is implied in earlier books. It makes you a little uneasy, which isn't necessarily a bad thing. It keeps you on your toes.

This book also provides a lot of insight into other characters. You are still left wondering about the allegiance of a couple of them. Now is the time to figure out who is on which side, because the Lurkers are about to launch a huge attack. War is imminent. The Witch Is Back ends just on the eve of that war beginning. I'm ready to have the battle begin!

Just a note that Be Witched is included with this purchase.