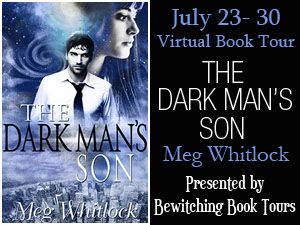 Today, I am honored to have a guest writer, Meg Whitlock, author of The Dark Man's Son. Enter the Rafflecopter at the end to win your own free copy! 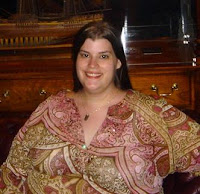 I’m proud of my characters. I can admit that: I am proud of the characters I create. It’s a surprisingly hard thing to admit, and I feel like I’m at some sort of meeting: “My name is Meg, and I’m good at creating characters.” Erf. Cringe.

It’s not like it’s an easy declaration to make. It’s taken me a long time to realize that I’m good at it, and it was a hard road I walked to get there. And the only reason I’m able to admit it now is because that’s the one thing reviewers constantly say about The Dark Man’s Son: the characters were great. They might say it’s confusing or not confusing or predictable or exciting, but the one consistency is a comment about the characters.

I take special pride in it because I did work hard to create these people, and because I spent so long writing fanfiction because I was afraid I couldn’t create good, solid characters. I’m not writing this post to brag. I know, it sounds like that. Hey, pat on the back for Meg! She’s Hot Stuff. I’m not, really. I just know what I like…and that’s what I try to bring to my writing.

We’ve all read books with static, boring people. They don’t do much. They don’t feel much. Maybe they say a whole lot, but it’s meaningless. I’m all for tropes, but there’s a limit: a character can be an archetype, but he or she also has to be a person. The Dark Man’s Son is filled with archetypes, but each one has a life. A backstory. Motivations and fears and hopes and dreams.

It’s like Method acting, in a way. One of my problems (or maybe advantages; I haven’t decided yet) is that I majored in about six different things in college before deciding on one and sticking with it. As a result, I know at least a little bit about a whole range of subjects, and those are just the things I formally studied. I was a theatre major when I first started, and of course we studied Method. You always study Method even though hardly anyone uses it anymore.

Anyway, I spent hours of my life writing backstory for characters in plays by everyone from  Shakespeare to Chekhov to Kushner. The seemingly insignificant details, the mundane minutiae of a person’s life, are what make that character a person. And, so says the Method, once you know all those details, you aren’t just acting like that character. You are he (or she).

Er, right, so that was a little off-subject, I guess. Now that you understand the basics of Method acting, let’s get back on topic.

I spent fifteen years creating the Guardians and, in particular, Alex. She’s undergone extensive changes since I first dreamed her up as an idealistic fourteen-year-old. Yeah, I’m still pretty idealistic…and I’m not exactly Queen o’ the Worldly, but a thirty-one-year-old (ugh, just had my birthday, and I still cringe) knows a little bit more about life than a young teenager. Alex has grown as I have, and I’d like to think that her current incarnation is closer to what a near-omnipotent immortal being might actually be like.

Don’t get me wrong: I didn’t go Brando on these characters. I’m not completely obsessive, and I don’t fully believe in Method. But I’m not acting here, dear readers. I’m creating. There’s a difference, though some actors might argue with me.

One of the major differences is as you write a character, you’ll discover things about them you never knew. I had no idea Jason hated fish until he said so. I didn’t realize Rorik (a centuries-old vampire, thanks) had a thing for Tarantino movies. And, wow, who could have predicted Cassius’ obsession with costumed garden gnomes?!

I don’t know if I can really take credit for Alex and Jason and the gang, to be honest. There’s a play (yes, more about theatre. sorry.) called Six Characters in Search of an Author by Luigi Pirandello. In it, actors are interrupted during rehearsal by six people claiming to be unfinished characters searching for an Author to continue their story. The Director agrees to stage the play, and the Characters’ story plays out. It ends with a drowning, a suicide, and the Director wondering if any of it was real. Right, so…it’s absurdist; just go with it.

Just like Michelangelo said that the sculpture was already in the stone waiting to get out, and Socrates believed that all knowledge is known and just requires the right questions to unleash it, I think maybe these characters are just hanging out in some ether waiting for an author to find them. To discover that they hate fish and love Tarantino and like to dress garden gnomes up like fairy tale creatures.

And we’re back to the beginning. I’m proud of my characters, but I don’t think I can take credit for them. Not completely. I know I sound like a crazy person, which I half suspect I am. But think about it. Where do you get your ideas? They’re an amalgamation of your every day life, your experiences, your trials and tribulations. So are the characters an author creates, like ghosts in the ether.

Meg Whitlock has been writing nearly all her life, and she’s glad she finally got over her laziness and wrote the book she’s been dreaming about for years. She
graduated from Queens University of Charlotte with a BA in Comparative Arts with an Art History specialization and an Ancient History minor…which is a mouthful no matter how you say it. She has four cats (including an invisible one), a car named  Babar, and a vivid imagination.

In 2001 her one-act play, “The Shoebox,” was produced by Catawba College in Salisbury, NC and presented at the American College Theatre Festival. She was honored by Art:21 and the Mint Museum of Art for her essay “Kara Walker: Using Stereotypes to Provoke  Thought,” and she’s won awards for both her fiction and non-fiction writing.

Posted by Andi at 9:00 AM
Labels: Bewitching Book Tours