'Toil and Trouble' Review and Giveaway

The second book in the Jolie Wilkins series by H.P. Mallory is Toil and Trouble. Read through my review and then enter the Rafflecopter below for a chance to win your own ecopy of The Witch Is Back. The fourth installment of this series is due out on Tuesday, July 31st and I am sending one reader a copy on that day! 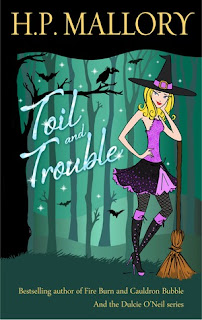 Toil and Trouble
Blurb from Amazon:
The Underworld in civil war.
The cause? A witch who can reanimate the dead.
A sexy as sin vampire determined to claim her.
An infuriatingly handsome warlock torn between duty and love.
Who says blonds have more fun?

After defending herself against fairy magic, Jolie Wilkins wakes to find her world turned upside down—the creatures of the Underworld on the precipice of war.

The Underworld is polarized in a battle of witch against witch, creature against creature, led by the villainous Bella, who would be Queen.

While Jolie has one goal in mind, to stake the vampire, Ryder, who nearly killed her, she also must choose between the affections of her warlock employer, Rand, and the mysteriously sexy vampire, Sinjin.

And as if that weren’t enough to ruin a girl’s day, everything Jolie knows will be turned inside out when she’s thrust into the shock of a lifetime.


My thoughts:
I think so far this one is my favorite. Jolie is coming into her own with her powers. She isn't as anxious as she was in the first book. She is embracing who she is and her stubborn streak has definitely lengthened.  It's got to be overwhelming to know that you are the cause of a massive civil war. Kudos to her for taking matters into her own hands!

And we all could stand to have a little Rand in our lives...Jolie learns a lot of secrets about him that help to answer a lot of questions about their relationship. She gives up almost everything for him. You hope it is worth it!

Plenty of action keeps the pages turning. My Kindle barely hit the 100% mark before I was online seeking out the novella Bewitched, which comes after this book.