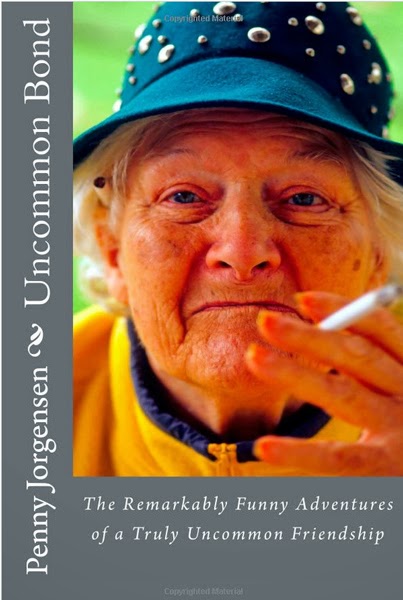 Uncommon Bond is an uproariously funny story that chronicles the unlikely friendship between a quick-witted, cursing, cantankerous, chain-smoking 96-year-old named Addie, and her timid, idealistic, thirty-something neighbor. Episodic in format and told through the eyes of the naive neighbor, each chapter takes readers on a riotous ride, turning the most ordinary daily occurrences into case-studies of contrasting personalities and unpredictable outcomes. Although heavy sentiment seems better left to more serious works, the story of this hilarious friendship is all heart. Readers will watch as Addie, adventure by adventure, teaches our narrator how to really live for the first time in her life. If you enjoy the best of belly laughs and turns of phrase that will cause you to giggle at the most unlikely of times, you will love Uncommon Bond.

I have long admired flight attendants for their poise under pressure and the crew on this flight merely reinforced that admiration. Not only did they bring additional goddamned olives, they brought the entire jar, a fork and a napkin, along with double martini number two. In either a gracious display of servitude or a really big hint that, perhaps, Addie should take a nap, the head attendant asked if she was cold and wanted a blanket.

“HELL YES, I’M COLD! MY NIPPLES ARE SO HARD I COULD CUT GLASS WITH ‘EM!” She says, as I shrink further and further into my seat.

“Well, that would be quite a trick, now wouldn’t it?!” The attendant says, with a big pleasant smile, before she rips down the aisle. When she came back with the blanket, she was kind enough to tuck Addie in as well. And believe me, the woman tucked with gusto. By the time she was done, all I could still see of Addie was her hat, her eyes and her two nostrils - and that flight attendant was sweating something fierce.

“You look like a burrito with a hat.” I say.

“THEY’RE SERVIN’ US BURRITOS IN HERE?!” She replies. “WHAT THE HELL KINDA MEAL IS THAT?! YOU’D THINK THEY COULD AT LEAST PUT A NICE SLAB OF HAM A GODDAMNED BUN FOR US!

I didn’t bother to clarify, nor did I let her know that because of the relatively short duration of the flight, we were stuck with a lousy pack of peanuts apiece and not a crumb more. It didn’t matter, because with a whole 19 minutes left before landing, Addie fell asleep. Well, ok, she passed out.

Penny Jorgensen is a freelance writer, poet, online editor, novelist, and is currently trying her hand at writing screenwriting. By day she is an independent website designer and content writer. “Uncommon Bond” is her second novel. Her first, “Absolution” is yet to be published, and her third, titled “Whisper of the Gods” is forthcoming. Her three anomalous cats, all rescues, allow her to live with them in the Seattle area, where they enjoy the company of one friendly neighborhood opossum named “Mr. Mooney”, working (or playing) in the yard and a variety of water activities.
Posted by Andi at 6:22 PM