'Even Hippies Get the Blues' by Michel Lee King 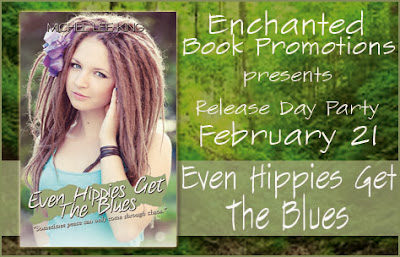 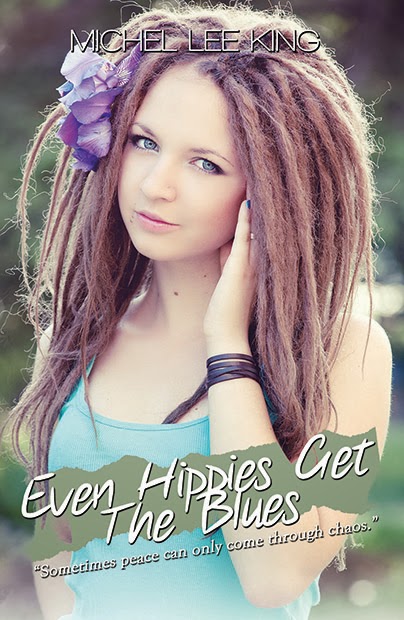 
“Sometimes peace can only come through chaos.”

Amy thought she had it all together. Her goals were set and she was working toward them seamlessly while practicing her peace-loving philosophy.

Her world of blissful ignorance crumbles when Travis, a blond paramedic with a body that can stop a truck, waltzes in to open her eyes... Just after Murphy, and his pesky law, paint a target on her back.

How many times can a waitress be interrogated in one day? Just how much orange acrylic paint can get caught in dreads before an interview? How does one retain their composure while dripping paint nude in their living room and staring down a trespassing police officer?

Laying in my womb-like chrysalis, I returned the phone call. On the third ring, my best friend answered. “Hey Amy. How’s it going? Why didn’t you answer?”

I started laughing hysterically at the situation. “I’ve been taken hostage by my sheets and they won’t let me go.”

A long pause followed my announcement. Finally I heard a soft chuckle. “Should I call the police? Or search and rescue?”

“Both,” I snorted mid laugh.

Her chuckle intensified. “Oh my god, you’re serious aren’t you?”

“Yes. I’m lying here, on the floor, wrapped up like some sunshine burrito, and I can’t get out.”

I had to hold the phone away from my head because she was laughing so hard. “Why are you laughing at a time like this? My dignity is at stake!”

Rustling met my wheezed outburst before the line went dead. Staring up at the stained ceiling, I gave in to the hilarity of my plight. Who else could get themselves this stuck in cotton?

Calmed somewhat, and out of breath, I gave the sheets an honest fight. Sadly, they were winning. Sweating, and only slightly less trapped, I inched my way into the kitchen where the aromatic wonder that was my customary French roast tempted my bruised ego.

Michel Lee King writes fiction that has a tendency to mix the light and dark elements of life and focuses primarily on the Literary Fiction and Fantasy genres.

Michel is a peace-, and fun-, loving person living in the shadow of Mount Rainier in Washington state.

She is happily married, has one son, two dogs, and a cat. When not consuming copious amounts of
coffee, she is writing, editing, or enjoying the outdoors with her family.