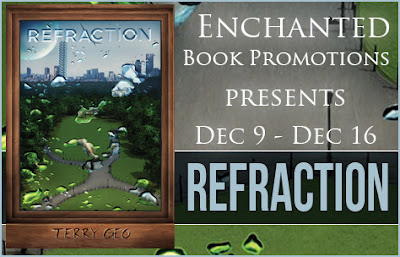 Welcome to the book tour for Refraction by Terry Geo! Today you have the opportunity to get to know him better, plus there's more insight into his new science fiction novel. You can also check out an excerpt, and then be sure to enter the giveaway!

Favourite time period: 1920s if I were rich, Mesozoic if I were invincible

Where do you live? London

Where do you want to live? San Francisco

Why? Have you been? I love San Francisco

What made you get into writing?


Nothing, I’ve just always been a writer. From the moment I put crayon to paper, I’ve been writing. Although I use a computer these days and have improved somewhat over the years.


Have you ever had a dream so real, it’s still been there when you’ve woken up? Something so vivid, you wished you could bring it back into the real world? Refraction takes that thought and expands on it. It’s set in modern-day London with relatable characters in real-world lives and situations who are brought together by Silicate, a company in the heart of London who have the technology to see and record people’s dreams.

Now imagine there was such a company, what dreams can you imagine being projected into our world? For me, I’m a huge geek for movies, animation, music, history, dinosaurs… Hmmm, maybe I’ve said too much!


You chose a diverse cast of characters for your book.


I did. I felt it was important to have strong females, racial diversity and same-sex relationships yet not have any of that pull focus away from the story. The characters are simply who they are, like all of us. We don’t run down the streets shouting at strangers, “I have a third nipple” or “look at my acne scars!” They are just a part of us the same way a disability is or the colour of our skin or the sexual orientation we were born with. We are all human beings and it’s time we saw each other that way and not by the things that make us different.


How long did Refraction take you to write?


I came up with the idea in 2012, I wrote a few chapters and then left it. The thought of completing a full-length novel was daunting. It was easier to keep it locked away in a folder and pretend it wasn’t there. Every now and again, I’d go back and write some more and then leave it for months, sometimes years at a time, but my brain never let me forget about it. In January this year, I sat down at my computer, determined to finish it. In seven years, I’d only managed to write 30,000 words, six months later, I’d written an additional 90,000 words. After edits, the published book sits at around 103,000 words. In one way it took seven years, in another it took six months. I’m giving myself a year to write book 2, so we’ll see how that goes.


There will be two, it’s part of a trilogy. This book is The Present, the next book will be The Future and the final book with be The Past.


Wait, this is the middle book then?


(Laughs) It is. They can still be read as stand-alone books, with the trilogy being an over-arching story thread linking them all together. I felt it was important to start in present-day so people can relate to what’s happening. It doesn’t read like you’ve missed anything, probably because you haven’t. I’ve not written it yet!


Who would enjoy reading Refraction?


It’s not a traditional sci-fi novel, it’s more like Charlie and the Chocolate Factory; real people in our world going on an extraordinary adventure together, through the impossible. Incredible things occur, yet I’ve written the book so that everyone can understand what’s happening. It’s the reason I wrote it through the eyes of four very different people of different backgrounds and ages; that way most people can engage with the story and the characters.


Where can we buy it?


At the moment, exclusively on Amazon in paperback and Kindle format. 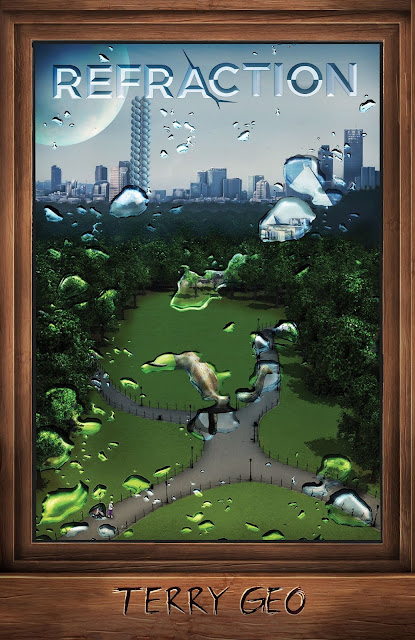 Most stories start at the beginning; this one begins at the end. At least for Maria. Her sudden death sends shockwaves through her family and pushes her grieving mother to the very brink of insanity. After exhausting every avenue conventional medicine has to offer, Maria’s father, Henry, brings together the world’s greatest minds in the hope of carving out a new path. Months pass, and as Henry watches his beloved Elena slowly drift away, he begins to lose faith. It is only then that a solution presents itself. A discovery so momentous, it saves Elena and reveals the most important scientific and technological breakthrough in modern history.

Silicate is founded; a privately funded facility which delves deeper into the human mind, able to discover answers to questions we are yet to ask. Securing Silicate’s secrets becomes of utmost importance; even after treating hundreds of patients, the public are still unaware of the wonders and terrifying reality Silicate has unearthed . . .

The world you know is only half the story.

“This is a private elevator with only three stops — here, the floor below, and The Particle entrance foyer,” Padman explained to Ryder. “Lord Braighton had it designed into the plans so that the volunteers and staff would have easier access to the lab. It comes in most useful when you want to bypass reception. You’ve seen how busy it can get.” He turned to Isabell. “Do you have your security pass with you?”

She looked through her handbag.

“I do somewhere. Ah, here it is. It’s always hiding in the bottom.” She looked up at Padman. “Give me a call when you want me in next. Like I said, I’m available every day next week and the deadline for my book is miles away, so I won’t have my agent pestering me for pages.

“It was very nice to meet you, Ryder. I hope to see you again. Don’t get scared off by all the craziness around here.” Isabell grinned as she entered the lift.

“Thanks. I’ll try not to,” Ryder replied, smiling, as the doors closed.

As the lift descended, Isabell looked in the mirror.

“Look at your hair, girl,” she muttered to herself. “When was the last time you got it cut?” She tried to coax some volume into her hair but was unable to achieve the look she was after.

The elevator doors opened and she walked through the foyer of The Particle and outside into the morning air. A gust of wind hit her in the face and forced her eyes closed.

“Issi, I know you’re lying. I know you’re sleeping with someone behind my back and this is the only way I can make sure you never cheat on me again.”

Isabell’s eyes shot open. She was strapped down and bound into the passenger seat of a moving car. Her mouth was taped and she was struggling to breath. Terrified, she looked around her, immediately recognising the driver. She knew she was about to die. 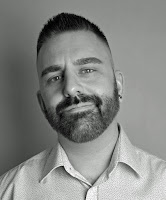 Born in Derbyshire, raised in Yorkshire, resides in London, Terry learned from a young age that he was different from his peers. He preferred the company of girls over boys, didn’t like sports and would write at every opportunity. He was bullied throughout his school life both physically and verbally and had to deal with the cruelty of others from an early age.

Terry Geo wrote and directed his first play at age eleven. At sixteen, he started work in television, writing scripts and becoming the youngest director in the country. Terry applied for a job while taking his final exams and started work in television the week after he finished school. For the first time in his life, he found a world where he could shine and be accepted for who he was. He came out as gay to his parents the following week and never again hid his sexuality from anyone. At seventeen he became the youngest director in the country, producing a light entertainment show for Yorkshire Television. After a short stint in a boyband, Terry went back to writing, editing two national publications. He toured the world as an actor, moved to London and in 2017, wrote and directed a musical for the London stage. A year later, Terry married Ken, the love of his life, in London. After their honeymoon in Thailand, he returned to a book he had started some years before. In January 2019, his cat Megara sadly passed away. This hit Terry hard and in memorial to her, he wrote her into the book he was writing. She is now a part of Terry’s debut published novel, Refraction.

Win an eBook copy of Refraction during the tour!

a Rafflecopter giveaway
Posted by Andi at 1:32 PM