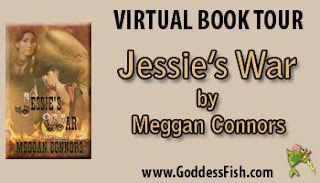 She's about to become a pawn in a brutal game between nations...

The American Civil War has raged for more than ten years. The outcast daughter of a famous inventor, Jessica White has struggled to salvage what little remains of her life. Then, one cold winter night, the lover she'd given up for dead returns, claiming the Union Army bought the plans for her father's last invention. But he's not the only one who lays claim to the device, for the Confederacy wants the invention as well. Both sides will kill to have it.

As an agent for the Union Army, Luke Bradshaw is a man who will use whomever and whatever is at his disposal in order to complete his mission. An attack by Confederate soldiers ensures that Jessie will turn to him for help, but Luke can't help but wonder about the secrets she keeps--and if those secrets will ultimately prove fatal.

Her cheeks heated and she sniffed. “I wouldn’t try the patience of my very generous benefactor, if I were you. I might also mention a bath could make your presence a little more tolerable. You’re lucky I didn’t sic Muha on you.”

Luke looked at the wolf, who thumped her graying tail in eager canine devotion. “You wouldn’t bite me, would you, old girl?” Scratching her head, he caught Jessie’s eye. “See, she still loves me.”

“Right.” He dug into the pocket of his vest, removed a small, folded envelope, and extended it to her. “I brought you something.”

The paper trembled, and it took Jessie a moment to realize his hands shook.

She folded her hands in her lap. “I don’t want anything from you, except your promise that tomorrow you’ll leave and you won’t come back.”

“Can’t promise you that, but I can give you this.” He shoved the envelope at her.

A nervous laugh escaped before she could stop it, and she took the letter from Luke’s outstretched hand. It was well worn and wrinkled, the edges charred, as if it had been rescued from a fire.

She ran her hands over the paper, and she sensed smoke and the heat of flames.

With shaking hands, she opened the envelope. She wasn’t sure what she had expected to find, but it wasn’t this. It wasn’t a photograph and a flood of memories.

Two young men. Union soldiers. Luke, clean-shaven and an older version of the boy she remembered, smiled broadly at the camera, his free arm around the shoulders of the young man standing next to him.

Gideon. His black hair and eyes, skin and high cheekbones showed the native blood he and Jessie shared. His mouth was set in a somber line, but she recognized the mirth in his eyes. Luke had never failed to amuse her brother.

On the bottom of the photograph, written in Gideon’s strong, precise hand, was, Me and Luke. October 28, 1867.

The day he died.

She put the photograph down beside her and turned to the second piece of paper, and her throat tightened as she began to read.

We leave for South Carolina today. Luke and I are assigned to different airships, but we’re both expected to be there by this afternoon. We don’t expect much resistance. There are rumors the Rebs have developed a weapon against our airships, but I’ve been working on something with Pop’s blue silver alloy. If it works, the Rebs will never be able to take us out of the sky. I only wish Luke were on my ship.

Don’t worry about us. Any day now, and we’ll be back where we belong. Luke sends his love. I’ll take care of him for you—don’t you worry. You take care of yourself and Pop.

The letter they’d received from Gideon’s commanding officer had assured her father that her brother had died quickly when his ship had plummeted to the earth and burst into flames. She had pretended to believe the lies for her father’s sake.

She traced Gideon’s words with the tip of her finger, trying to feel some remnant of her brother’s presence in the strong lines of his penmanship. New pain built in her chest when she realized her efforts were futile—his energy wasn’t there. His letter contained his words, but no trace of him.

“I always meant to come back.” Luke’s voice sounded rough. “I walked all the way back to the crash site, looking for him or something of his. I was given this. I’ve carried it ever since. I always meant to give it to you.”

She set the photograph in her lap. She memorized this last image of her brother, dressed as a solider with his best friend by his side.

Luke put his hand on her shoulder.

She flinched. “Don’t. You should have sent this when you found it.”

He dropped his hand. “I wanted to give you the letter in person.”

“Go away.” The words came out strangled.

“I wish you had been the one to die that day.”

This one small memento of her brother ripped her open and tore out her heart all over again. The pain was as raw as the day she’d learned of his death.

“You have no idea how many times I’ve wished the exact same thing.” 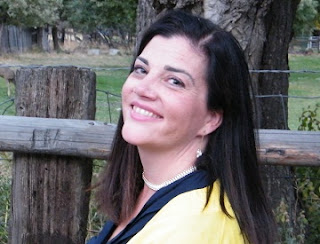 Meggan Connors is a wife, mother, teacher and award-winning author who writes primarily historical and steampunk romances. As a history buff with a love of all things historical, she enjoys visiting both major and obscure museums, and reading the histories of the Old West and the British Isles. She makes her home in the Wild West with her lawman husband, two children, and a menagerie of pets. When she's not writing, she can usually be found hiking in the mountains, playing in the snow, or with her nose in a book. Favorite vacation destinations include the sun-kissed hills of California, any place with a castle or a ghost (and both is perfect!), and the windswept Oregon coast.

Meggan will be awarding a silver pocket watch pendant and a cameo choker, and a signed paperback copy of The Marker, her historical romance to a randomly drawn commenter during the tour. (US/CANADA ONLY) Follow the tour for more chances to win!
Posted by Andi at 3:30 AM