Meet Shelia Roberts, author of 'What She Wants' 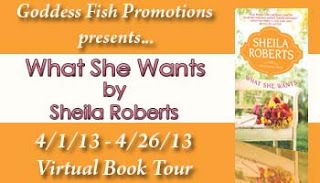 Today, I would like to extend a warm welcome to author Shelia Roberts. Be sure to leave her a comment after you read the interview!

I'd noticed that sometimes we women don't notice nice guys who are right under our noses. I thought this might be a fun subject to deal with. So that was my jumping off point. And, you know, men are always complaining that they don't understand us women. I don't think we're that hard to figure out, but hey, I'm not a guy. So, I got to thinking, how could a clueless man figure out what women want. And that's when the idea of romance novels popped into my head. I thought it would be a fun idea to follow a group of men as they try to solve their woman problems using romance novels as their textbooks. And it was! (At least I had fun. Not sure my characters always did.)

Definitely the main character Jonathan. He's such a sweet guy and has a big heart. He's definitely a bit of an underdog and I found myself falling in love with him as I told his story.

I have a lot of favorite scenes. Jonathan's dancing debut is one. It's not easy for a shy guy to put himself out there and when things go wrong it can be torture. Heck, it's torture for any man when he looks foolish. My poor hero.

Can men really learn a lot about women by reading romance novels?

Well, I think so. Since romance novels are written by women these books provide some pretty strong clues as to what we want in a man.

Are there lessons to be had for women, as well?

Absolutely! Love is all about sacrifice and compromise. And that door swings both ways.

What are some lessons you have given or received from romance novels?

One of my favorite romance novels of all time is Georgette Heyer's The Masqueraders. The main hero in that is so noble and protective of the heroine! It makes me sigh just thinking about him. That hero set the bar pretty high but he showed me what I wanted in a man. Happily, I found one who measured up. As far as lessons I've tried to give in my novels. I think one of my favorites, Love in Bloom, is a good example of what a hero should be. That hero loves the woman even though her body isn't perfect. He looks beyond that and sees into her heart. I hope that inspires readers to do the same when looking for their true love. I also love my hero in Better Than Chocolate because he has principles. He, too, is self-sacrificing, and I think that's what makes a true hero. And heroine!

What is the recipe for a great romance novel?

Mix a generous helping of attraction with obstacles. Stir well. Add determination and sacrifice and let the whole thing bake until done. (You'll know you're done when your characters have reached their happily-ever-after.)

If you could be a character in any book, whom would you choose?

You know, I sat here for a long time scratching my head over this question. I finally realized my answer has to be none. Much as I enjoy reading I'm so happy with my own life I wouldn't want to change places with anyone, fictional or real.

I was writing stories when I was a child, so I think I've always known on a subconscious level that I'd be doing this.

Are you currently working on any other projects?

Oh, yes! I'm just finishing up the next book in this series, The Icicle Falls Book Club, which will be out this fall.

Yes. Thanks for letting me come visit! 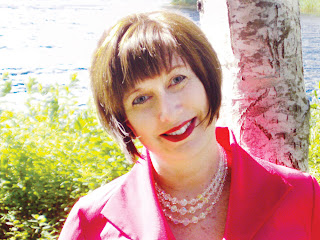 Sheila Roberts lives on a lake in the Pacific Northwest. She’s happily married and has three children. She’s been writing since 1989, but she did lots of things before settling in to her writing career, including owning a singing telegram company and playing in a band. Her band days are over, but she still enjoys writing songs. When she’s not speaking to women’s groups or at conferences or hanging out with her girlfriends she can be found writing about those things near and dear to women’s hearts: family, friends, and chocolate. 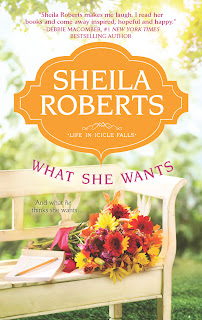 What She Wants
by Sheila Roberts

What do women want?

Jonathan Templar and his poker buddies can't figure it out. Take Jonathan, for instance. He's been in love with Lissa Castle since they were kids but, geek that he is, she's never seen him as her Mr. Perfect. He has one last shot—their high school reunion. Kyle Long is equally discouraged. The pretty receptionist at his office keeps passing him over for other guys who may be taller but are definitely not superior. And Adam Edwards might be the most successful of Jonathan's friends, but he isn't having any success on the home front. His wife's kicked him out.

When Jonathan stumbles on a romance novel at the Icicle Falls library sale, he knows he's found the love expert he's been seeking—Vanessa Valentine, top-selling romance author. At first his buddies laugh at him for reading romance novels, but soon they, too, realize that these stories are the world's best textbooks on love. Poker night becomes book club night…and when all is read and done, they're going to be the kind of men women want!


Excerpt may be found here:

Buy it on Amazon: http://amzn.to/ZUXFWD

Sheila will be awarding a print copy of What She Wants (US/Canada only) to 10 randomly drawn commenters during the tour. A Grand Prize of a $25 eHarlequin coupon plus a finished copy of What She Wants (US/Canada only) will be awarded to a randomly drawn commenter during the tour.
a Rafflecopter giveaway
Posted by Andi at 1:32 AM
Labels: book promo, giveaway, Goddess Fish, interview, romance