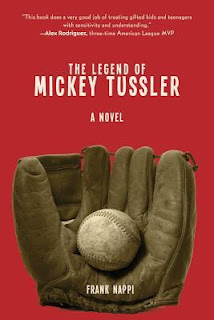 THE LEGEND OF MICKEY TUSSLER / SOPHOMORE CAMPAIGN
By
Frank Nappi

THE LEGEND OF MICKEY TUSSLER

In the late 1940s, the minor league Milwaukee Brewers are foundering yet again and manager Arthur Murphy is desperate. When he sees seventeen-year old Mickey Tussler throwing apples into a barrel, he knows he has found the next pitching phenom. But not everyone is so hopeful. Mickey’s autism—a disorder still not truly understood even today—has alienated the boy from the world, and he is berated by other players and fans. Mickey faces immense trials in the harsh and competitive world of baseball while coping with the challenges inherent to his disorder. An honest and knowledgeable book about overcoming adversity, and the basis for the television movie A Mile in His Shoes, Mickey’s powerful story shows that with support and determination anyone can be triumphant, even when the odds are stacked against him.

Read an excerpt by clicking here. 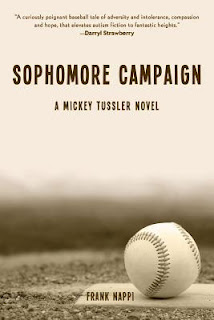 It’s 1949 and eighteen-year-old pitching phenom Mickey Tussler is back with the rejuvenated minor league Brewers in the sequel to The Legend of Mickey Tussler (the basis for the television movie A Mile in His Shoes). Despite Mickey’s proclamation that he will never play baseball again after last season’s violent conclusion, his manager— and now surrogate father—Arthur Murphy cajoles the emotionally fragile, socially awkward boy with autism into giving it another shot. Mickey reluctantly returns to the field and must once again cope with the violence and hatred around him. When a young African American player joins the team, the entire team is subjected to racial threats and episodes of violence, one of which Mickey witnesses firsthand. Struggling to understand such ugliness and hatred, and fearful of reprisal should he tell anyone about what he has seen, the boy’s performance on the field suffers. Mickey now must deal with a side of human nature he scarcely comprehends.


Read an excerpt by clicking here.

I am a huge fan of Frank Nappi. A few months ago, I fell in love with his book Nobody Has to Know, which is a story of an illicit affair between a teacher and his student, that goes horribly wrong. I also interviewed him and had he told me a bit about the Mickey Tussler series. I have fond memories of watching baseball when I was a kid. I also work with children, some of whom have autism, and have several friends with autistic children. This series just seemed meant for me to read.
I love these books. The plot of each one goes beyond simply baseball, or autism, or race. The different storylines blend together to make for an intriguing glimpse into the world of yesteryear. Many of the points being made with the characters and their situations are still valid today. Delicate issues are gracefully handled, yet messages are driven home. You develop a relationship with the characters and feel like you know them, or someone just like them. You are appalled at how some of them treat each other, because humans shouldn't treat other humans that way. You become protective of the vulnerable ones and wish for the jerks to reap their just rewards.
And then there are the baseball games. Reading the descriptions of the games made me think of minor league baseball when I was a kid, and was reminiscent of other great baseball books. Frank Nappi has a way of telling a story that is sure to stay with you for some time to come. I am excited for a third installment to come out and look forward to reading it. 
Frank will be awarding a $50 Amazon gift card to a randomly drawn commenter during the tour. Follow the tour for more chances to win!
Posted by Andi at 3:30 AM
Labels: autism, baseball, book review, giveaway, Goddess Fish, sports