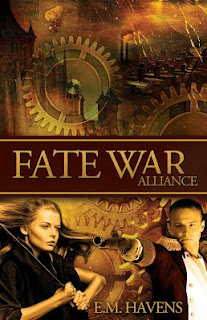 Prince Cole meets Samantha when she walks down the aisle. Though she seems like the polished women he is familiar with, there is something different. She is complicated and full of mystery. Her dowry comes with a promise of air ships and mech capable of defense against their common enemy and for his country to survive, he must unravel her secrets. It is only when each accepts their destinies can they save their people from the plans of the Fate Sovereign.


A Gift for Sam

“This is your surprise.” He gestured towards a building a few paces away from the heap of Fate mech.

“A shed?” Sam eyed him warily.

“Open the door, silly.” He placed his hand on the small of her back, and ushered her into the room. The lamp light sparkled off of her wonder filled eyes.

“How…When…” She rushed into the room, investigating in earnest. Tinker tools and supplies filled the shelves lining the walls. A work bench occupied the far end of the shed, outfitted with a large set of magnifiers.

“The Tinker in Sagewood, he wanted to retire so I bought him out and had the shop moved here. It’s yours. Of course you’re still welcome to visit me in my laboratory anytime you wish.” He gave her a courtly bow, and by the time he rose, she was on him.

Caught off guard by her advances he fell back into the workbench, toppling boxes of screws and cogs. He didn’t care because her lips found his. She bit his lip teasingly and he returned the favor. He fleetingly thought he had helped awaken more than her sense of self when her hands began tugging at his shirt.

Cole swept his hand across the work bench clearing it of various tools and boxes, sending a magnifier crashing to the ground. He spun Sam around and lifted her to the table. He stepped into her and she cradled him in her thighs. His hands found the hem of her shirt as well and he barely restrained the urge to rip it off instead of unbuttoning it. Her hands worked feverishly at his, stopping occasionally to pull his lips back to hers.

“Damn,” he cursed, getting stuck on a particularly rebellious button, and realized Sam had stopped her attentions to him. She stared at nothing with her head cocked, listening. He was about to ask her what was the matter when he heard it too, the rhythmic thrumming of an air ship.

Without a word, they quickly made themselves presentable and hurried outside. The airship was just visible, approaching over the treetops, a trail of smoke in its wake. Cole grabbed Sam’s hand and pulled her toward the lawn where they would have a better look as it flew over, on its way to the clearing.

“No.” Sam hissed. The ship’s airbladder was Perspician blue, and the ship itself was ornate enough to belong to only one passenger. “Mother.”

Buy it on Amazon: Paperback \ Kindle

Who is E.M. Havens? I’m a lot of things. The word that seems to define me most at the moment is mom. It can be all consuming. Not only am I a mom of three (one of them is a teenager…pity me), but I also home-school (pity me more). I share this awesome responsibility with the love of my life, best friend, and soul-mate husband.

Somewhere in there I find the time to write. I started out young writing poems, then moved on to songs. I actually have a Bachelor in Music with a secondary in Science because I can’t stand English. Yes, the writer hates English. I like to read the story for the experience of reading the story, not to nitpick each letter and comma. But I digress.

I eventually found blogging and really enjoyed sharing my life that way. When an unfortunate turn of events separated me from my music equipment, I decided to use my overactive imagination, my love of reading, and my new found hobby, prose writing, to release some of my creative energy. I wrote my first novel and loved the experience. Fate War: Alliance is actually the second novel I wrote and the first to be published. Now I’m working on my third and several sequels to Fate War!

So that’s pretty much me, sitting in the Arbuckle Mountains of Oklahoma, reading, writing, collecting eggs from the coop, and being a schoolmarm. It’s a pretty great life.