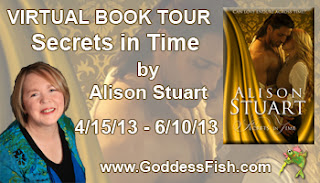 Today, please take a few moments to welcome author Alison Stuart, as we get to know her and her book 'Secrets in Time' a little bit better. As always, thanks for stopping by and reading!

Hi Andi and thanks for having me here!


I have always wanted to write a time travel story. My love of history stems from childhood and A TRAVELLER IN TIME by Alison Uttley was one of my favourite stories.

I have a passion for the English Civil War and I used to go to sleep at night, my head buzzing with the latest story I had just read, willing myself to wake up and find myself magically transported back in time.

This particular story began as a writing exercise for a writing group I was involved. It lingered in the cyber sock drawer for a few years and I came upon it by accident which goes to show no writing is ever wasted. Time travel+ English Civil War = A fun story.

Do you believe that love can transcend the ages?


There are different types of love… and in SECRETS IN TIME I explore both romantic love and the love of a parent for a child. Both can be powerful to transcend time itself.If you could time travel, when and where would you go?

I have long since got over my desire to wake up and find myself in the middle of the English Civil War. I couldn’t imagine anything more unpleasant…as my heroine finds out. Much better to travel in time in my own imagination where at least I have a toothbrush and modern medicine.


Having lived and breathed the English Civil War since I was young, the historical research is now just part of my cellular structure.

It was 1995 I found myself having to research! I had to do quite a bit of research into a particular aspect of pediatric medicine but fortunately I had an obliging cousin who was prepared to make sure my research checked out.

Do you prefer to write books in this time period?


I have an absolute passion for the English Civil War. It’s a fascinating and little understood period of history. Like the American civil war, it pitted Englishman against Englishman in a brutal war brought about by a weak and stubborn King (who lost his head). After Charles I died, England toiled with a form of republicanism and when the monarchy was restored, it brought with it the system of democratic government we know today.

From a writer’s point of view, it is a period of passion, tragedy, intrigue and romance. Perfect fodder for the historical romance writer!


I have a couple of books under consideration by publishers at the moment-- a Regency murder mystery and an English Civil War romance set in a besieged castle. Current works in progress include a Restoration period sequel to my first two English Civil War novels (BY THE SWORD and THE KING’S MAN) and a “cosy” murder mystery set in Singapore in the early 1900s – just for something completely different!


I have copies of letters I wrote dating from the age of 11 in which I assert that I want to be a writer. At school my best friend and I both spent our lunchtimes perched in the willow tree in the playground writing our best selling novels. Mine (guess!) was an English Civil War story called “The Locket of Grace”.


I wish I could say I did but I am an erratic writer with a part time job and a swag of outside interests. I start every day intending to start writing but I am the mistress of procrastination so when I do get to writing I’m always surprised that it is half way through the afternoon and I need to think about the evening meal.


I am blessed to be a member of Romance Writers of Australia where wonderful advice abounds on every aspect of writing, but I think the best piece of advice came from a woman I greatly admired, but had no idea she wrote romance fiction. She told me that if I wanted something badly enough, I would get there and it’s so true. There have been many times along the writing journey when I could have given up but I have kept going and I am now proud to put “writer” down as my occupation.


I have just ridden on a float with the Krewe of Morpheus in the 2013 New Orleans Mardi Gras. That is something so surprising that I still surprise myself that an Aussie from Downunder found herself tossing beads in New Orleans. Such fun. You can read about it on my blog. http://www.alisonstuart.blogspot.com.au/2013/02/riding-float-new-orlean-mardi-gras-part.html


I wrote most of this book while my father was in his last illness. I would go from sitting by his bedside straight into this magical world of time travel, witches and dashing cavaliers. Writing was my solace and escape in a time of incredible sorrow and a gift I was truly thankful for. However this is far from being a sad book so I do hope the readers enjoy it.


And thank you once again for having me, Andi. 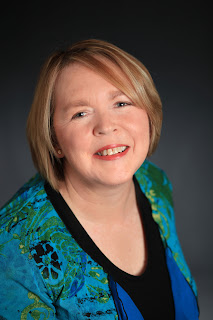 Alison Stuart is an award winning Australian writer of historicals with heart. Whether duelling with dashing cavaliers or waywards ghosts, her books provide a reader with a meaty plot and characters who have to strive against adversity, always with the promise of happiness together. Alison is a lapsed lawyer who has worked in the military and fire service, which may explain a predisposition to soldier heroes. She lives with her own personal hero and two needy cats and likes nothing more than a stiff gin and tonic and a walk along the sea front of her home town. She loves to hear from her readers and can be found at her website, facebook, twitter and Goodreads.

Find Alison on the Web 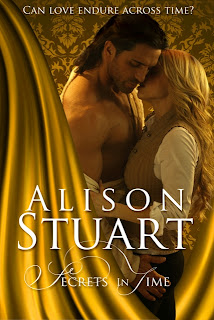 
When a seventeenth-century cavalier hurls himself over her garden wall, Doctor Jessica Shepherd is more angry than surprised. Although she ís no stranger to military re-enactors, there ís something different about Nathaniel Preston. If he ís to be believed, something…or someone…has sent him forward in time from the midst of a civil war to the quiet English countryside of the twentieth century.

With time working against them, Nathaniel has to convince Jessica why fate brought them together before he ís forced to return to his own era and certain death in battle.

Can the strength of love overcome all obstacles, even time itself?


Alan and I went through his clothing but found nothing that gave any indication of his identity, either in this century or the seventeenth. The only hint was the finely wrought initials NP in the guard of his sword.

“It doesn’t prove anything. He has a sword with initials that match the name he gave us.” I traced the intricate fretwork on the hilt of the sword with my finger. “What do you know about the seventeenth century Nathaniel Preston?”

“He’s dead,” Alan replied with a wry smile. I pulled a face at him and Alan shrugged. “At the start of the war he formed his own local regiment and declared for the king. He fought at Edgehill but spent most of the rest of the war in local defense of this area. A few days before Naseby, he was instrumental in deflecting the parliamentary advance at the battle of Chesham Bridge.” He stopped. “I am not sure going to Heatherhill Hall is such a great idea.”

“Because he may not like what he finds out.” Alan looked into the depths of his coffee mug.

“Like what? That he’s dead? I think even he may have worked that out.”

Alan looked up at me. “That he died at the battle of Chesham Bridge.”

“Oh.” A cold shiver ran down my spine. Even I knew the date of the battle of Chesham Bridge- -12 June, 1645--its anniversary would be in nine days time. I tried not to think what it would be like to know the exact date of your death.

Alison will be awarding ecopies of her two previously published books THE KING’S MAN and the award winning BY THE SWORD, which are set in the same period as this story, to a randomly drawn commenter during the tour, and a gift pack of Alison Stuart products to a randomly drawn host. Follow the tour for more chances to win!
Posted by Andi at 3:30 AM
Labels: book promo, excerpt, giveaway, Goddess Fish, historical fiction, interview, romance, time-travel