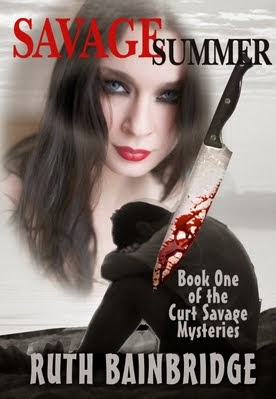 “When life gives you lemons … be sure to spit the pits out of that lemonade you’re making. Otherwise you’ll choke.” – Curt Savage

The past year has not been a good one for Curt Savage. Depressed over the death of a loved one, he’s gone into hiding, becoming entirely too comfortable with saying that he’s in the Witness Protection Program. But the urge to find that elusive killer puts his MIA status on hold. With the help of his new buddy Mike, he delves into the murky world of tracking down a killer — and uncovering who poisoned a neighbor’s dog.

SAVAGE SUMMER is the first in the Curt Savage mystery series. Going from former cop to private dick, he represents a new kind of detective—the reluctant kind. As his best bud Mike puts it, “Private investigation just got Savage.”

The phone jarred me out of the fantasy. I awoke suddenly, shielding the light that assaulted my eyes. The odor of Ruthie’s perfume was everywhere.

“Ruth?” I called out. Disoriented, I reached out to her side of the bed, expecting her to be there. It took me several more seconds to realize that she was dead.

“Hello,” I started. The gravel in my throat demanded that I clear it once or twice.
“I’m responding to the ad about Ruth Warwick’s murder.”

Those words officially woke me up. More effective than any cup of coffee, the voice synthesizer disguised the caller’s identity, but the point was that someone had finally phoned. Ever since I’d been dispensed with as a suspect, I’d placed small pennysaver ads in papers published in both Pennsylvania and Ruthie’s home state of Connecticut. Somebody knew something, but I hoped this wasn’t some clown trying to get the reward money from punking my ass.

“Yes, go ahead. I’m listening,” I replied as I ran for a pen and paper. I wanted to be ready, but all I heard was static and heavy breathing. I guessed that it was “all about the money” time. In a second, they’d be asking for the details of how to collect. I figured I’d beat them to that particular punch. “Look, if you’re worried about the reward, the $10,000 will be released when it leads to the arrest of the person, or persons, responsible.”

“I don’t care about the money. There are bigger things going on.”

“What? What do you mean? What things?”

“You know my name? How—“
“Inconsequential, don’t you think? Right now, all I can say is this—Ruth was having an affair.”

The click of the receiver on the other end told me the call was concluded. Shocked by the accusation, I stared at the phone, still in my hand. In a million years, I’d never expected a call like that. I collapsed in a chair, trying to think things through. I concluded it had to be a joke perpetrated by someone that thought I hadn’t suffered enough. I slammed the phone back into its stand and took my shower. My stomach was in knots. I was upset that someone was trying to put things in my head about the woman I still loved.


Born in the idyllic, sleepy town of Ithaca, NY, Ruth Bainbridge has been a lover of mysteries for her entire life.

Ever since a child, she has consumed detective stories at regular intervals, becoming enamored with all the superstars of crime. She loved nothing more than to match wits with the likes of Hercule Poirot, Miss Marple, Thomas Pitt, Lord Peter Wimsey, Richard Jury and Edward X Delaney, becoming inspired by their brilliance. Hoping to emulate her writing idol’s achievements in dreaming up such characters, she started composing her own short stories.

However, life interfered with her plans of becoming the next hopeful to try a life of crime—on paper at least. Devoting herself to her marriage and the raising of four children, the empty nest syndrome gave her the impetus to return to her first love—murder.

SAVAGE SUMMER is Ms. Bainbridge’s debut novel. It introduces Curtis Owen Savage into the world of ink and fury. Savage is engaged and about to be married when the brutal murder of his fiancée sends the world crashing down around him. Depressed, he isolates himself to better deal with the pain, but his beloved Ruthie won’t leave him alone. Haunting him with her presence, he becomes obsessed with finding her killer, and making him pay for taking her away.

With the help of a quirky friend and an old colleague, he takes his first steps, but the poisoning of a next door neighbor’s dog lands him his first case—and into a new profession. Hired as a private detective, he navigates through a complex series of clues to discover why someone attempted to kill the black Pomeranian. In the midst of trying to track down the motive, he receives his first anonymous phone call from a phantom who insists he knows secrets about his fiancé’s death. Dubbing the caller Dr. Shadows, the tidbits scattered become the breadcrumbs that lead Savage down a dark rabbit hole that was never meant to be discovered.

Her next planned project is MURDER MOST FOWL. Alex “Trout” Matthews, is a former NYC detective. Now retired, he moves to the town of Portsmith, Idaho so he can focus on his one passion—fishing. But as Ruth puts it, “Murder rarely leaves an inquisitive mind alone for long.” He soon finds himself pulled back in the stream of things and knee-deep in mystery.