Ingredients For a Successful Paranormal Thriller by K.S. Augustin, author of 'The Complete Check Your Luck Agency'

Ingredients for a successful paranormal thriller

When I first sat down to write this post, I wondered to myself whether The Complete Check Your Luck Agency (the omnibus edition of the entire Check Your Luck series) could be described as a thriller. I planned out the entire series pretty much as soon as the first book was finished, and thought of it as an urban fantasy but, now Andi mentions it, there are definite thriller elements included as well! :)

Before I continue, it's not up to me to say whether you'd consider the book “successful”. If you enjoy it, that's terrific and thank you very much, but I think I'll just put down what I thought was important to include.

People read fiction to escape, so I set the book somewhere where people like to holiday: an exotic location that encompassed Singapore and the southern tip of the Malaysian peninsula. However, to keep the reader as comfortable as possible, I didn't get too exotic. Throughout the book, I included elements that most Western readers would be familiar with, such as urbanisation, traffic jams and (some) Western food. And everybody's heard of Singapore!

But it was also important to include the exotic elements. There are descriptions of the local food, the prevailing architecture, and I hope I managed to convey the atmosphere of living in such a region. Instead of using Western mythologies, I relied mostly on a set of local Malay, Indian and Chinese beliefs, although I tied some of them in with Western names (vampire, elf, demon) from time to time so that readers wouldn't get thrown off balance too much.

None of these things, however, are exciting—or thrilling—unless you can tie them in with reality. I took inspiration from Dick Wolf's “Law and Order” series to rip some events from the headlines, so to speak. The people drowning in high­rise water tanks? Really happened. The headless torso pulled out of a dam? Also happened. Both cases are still unsolved, by the way. Piracy in the Malacca Strait? The Malacca Strait has the highest incidence of sea piracy in the world. The potted history of criminal gangs in Hong Kong? The running joke about expensive Buddhist rites? The weeping tree? All based on fact.

I haven't mentioned the characters yet, have I? In order to draw in the reader, the characters must be sympathetic but not infallible. Superman wouldn't be anywhere near as interesting without the existence of kryptonite. Or, to put it another way, perfect people are boring. Ursula Formosa, the main protagonist, is a nice person, but she's also stubborn and wilfully blind from time to time. Fiona, her employer, runs the agency like a ruling empress but can be wound around her selfish son's little finger. A woman who has lived for centuries is so closeted, she brings out Ursula's maternal instincts. And, of course, you also have the usual crowd of cheats, magicians, holy men, businessmen, and innocent bystanders that you have in real life.

And, lastly, the stakes. It must be personal for all the people involved, both the heroes and the villains. Everyone's motivations must be clear or, at the very least, understandable. I try to build my bad guys as carefully as I build the good ones, and I give my villains a few wins along the way. Where are the thrills if the heroes win in every encounter?

So those were some factors I considered when writing The Complete Check Your Luck Agency and, if you're thinking of writing any sort of thriller, I hope it's helped you a bit. Best of luck with your own projects. 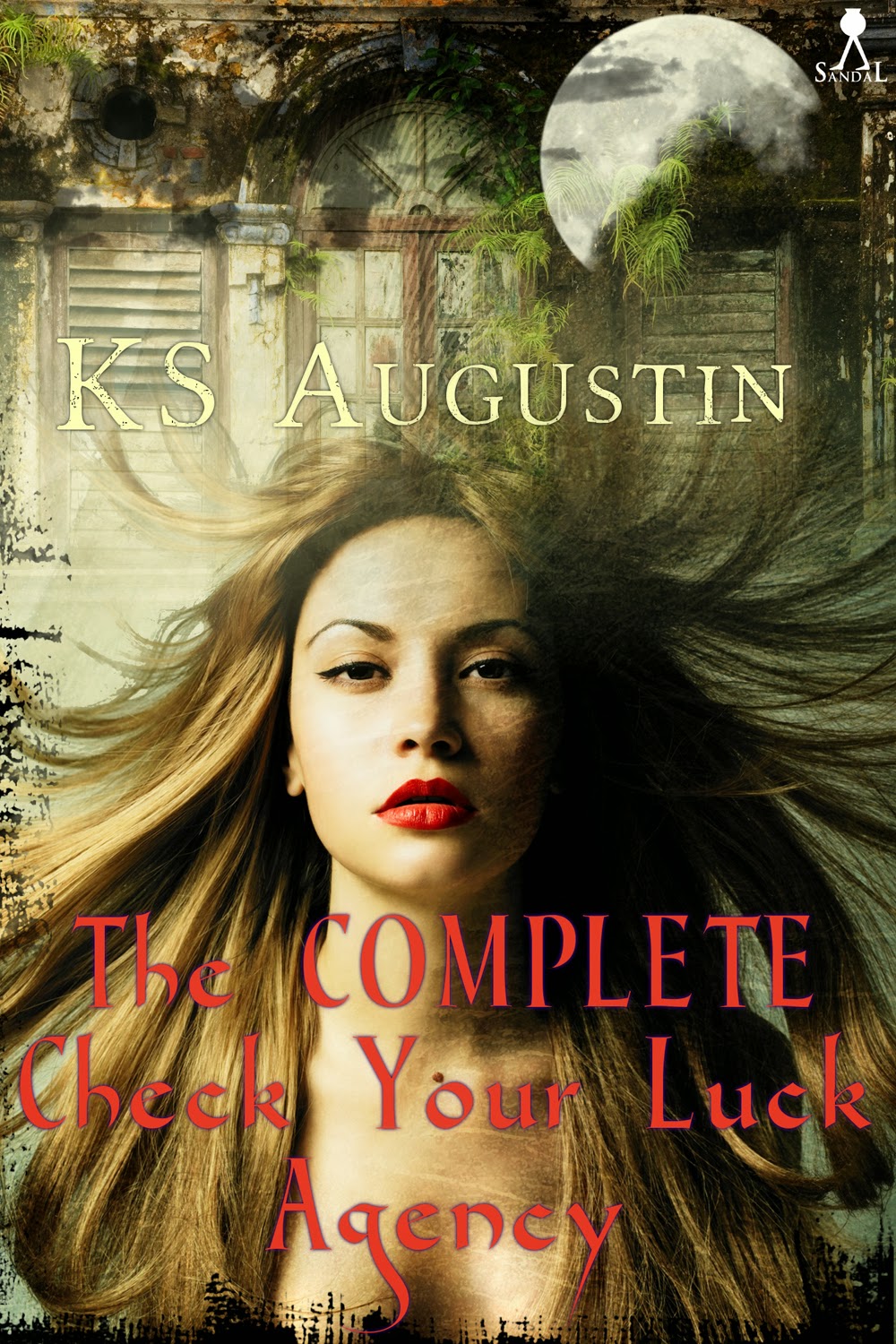 The Complete Check Your Luck Agency
by K.S. Augustin

Sometimes life is stranger than fiction.

After the tragic death of her parents, and with nothing left tying her to the United Kingdom, Ursula Formosa returns to her homeland and a job with the eccentrically-named Singapore firm, “The Check Your Luck Agency”.

What begins as an attempt to stave off boredom turns into a new way of life as the scales drop from Ursula’s eyes and she tentatively enters a realm that contains vengeful ghosts, toyol, demons, pontianak and curses, not to mention old-fashioned fraud and larceny. As she befriends bomohs, mediums and a young woman already centuries old, Ursula’s ideas of friendship expand into a fresh view of the world that surrounds her.

But she isn’t going to be left to ease into things. A criminal mastermind, who is also a powerful sorcerer, is gathering mythical creatures to help him possess every living soul in Singapore, and he isn’t about to let the members of The Check Your Luck Agency stand in his way!

“Did you have any difficulty finding the house?” Evelyn Long asked as she led me up a short flight of concrete steps.

“Well, the taxi driver wasn’t too keen to drive down the lane.”

Evelyn nodded her head. “The ignorant fear what they don’t understand,” she said.

I made a noise that might have indicated I agreed with her sentiment, and left it at that.

“I’m sorry,” I cut in, a shade too quickly, “I knew I shouldn’t have come. Perhaps I could pay him another visit some other time?”

I turned as if to leave and Evelyn Long grabbed me by the arm. No, “grabbed” was too gentle a term for it. Although her movement was smooth and she appeared to hold me lightly, I knew I would not be able to wrench free of her grasp without breaking flesh or limbs, or both, all of them mine. I looked up at her, startled, but saw nothing beyond polite interest. There wasn’t an ounce of strain on her face, nothing to show that she had me manacled with her slim, delicate-looking fingers.

“He won’t be much longer,” she said, as if commenting on the weather. “He’s been waiting to see you for more than a month now. We’re both glad you visited.”

And I suddenly realised that nobody knew where I was. Long and his supernaturally strong wife could do whatever they wanted with me, dispose of my dead body no doubt in the acres of primeval jungle behind their house and nobody would be the wiser. A wave of energy suddenly thrummed beneath my feet, a surge so strong I was sure that Long’s wife was able to feel it pulse through my body and travel to hers at our menacing point of contact.

“Why don’t I get you something to drink? You can relax while I fetch Alfred.”

KS "Kaz" Augustin loves writing human stories, whether set on Earth or out among the stars. Malaysian-born, she has travelled a goodly portion of the world and lived to tell the tale! Her urban fantasy release, The Complete Check Your Luck Agency, consists of five books, exploring the myths and legends of the melting-pot that is south-east Asia. Come for the food, stay for the monsters! (Ghosts included at no extra charge.)

As if all that's not enough, she's also Chief Editor of the free online quarterly magazine, Sci-Fi Romance Quarterly. http://www.scifiromancequarterly.org/

The author will be awarding a $25 Amazon GC to a randomly drawn commenter during the tour. Follow the tour for more chances to win!
Posted by Andi at 3:30 AM
Labels: book promo, excerpt, giveaway, Goddess Fish, guest post, thriller