I'd written half a dozen horror novels already, and the comment I heard most from family members was, "When are you gonna write a nice book?" (One without monsters, being the implication.) Flashback is my answer to that question. While it's not a nice story, it's certainly less bloody than my others. I also wanted to dabble in another genre. Since mystery stories utilize a lot of the same writing techniques as horror, it felt like a natural fit.

What kind of research did you have to do?


Mostly research on Hollywood's Golden Age. There's an extended sequence in the book that takes place in the '40s, so I had some period research related to that. The rest came from the geography and attractions of modern-day Los Angeles.


Gregory Kincaid, the faded B-movie star. The novel centers around him, because I wanted it to be a character study. Usually the idea for a plot comes first; this one came to me as that main character, so I crafted the plot around him.


I can't tell you that without giving away spoilers; however, I'll tell you the moment Kincaid became his own person and not a character on the page. There's a scene where the old actor attends his first public signing in twenty years. The last people in a long line of attending fans are a boy and his father. Kincaid takes time to perform vaudeville shtick for the kid, and I had no idea he'd do that. The character acted on his own, and that moment changed my perception of the protagonist.


I don't talk about works in progress except in the broadest terms. I'm halfway through a new book, and I'm reading a stack of research material for my next one. I may also squeeze a screenplay between these longer projects.

Who are some of your favorite classic Hollywood actors?

What are some of your favorite classic Hollywood movies?


The Wizard of Oz gets my vote for the greatest movie of all time. I watched that film over and over when I was a kid. It's got witches and (flying!) monkeys -- what more could a boy ask for?

If you could relate your life to a movie, which one would you choose?


Probably a cross between The NeverEnding Story and The Shawshank Redemption. In one the main character lives out adventures in his oversized imagination; in the other, the protagonist is cooped up in a prison cell. A novelist's life is a blend of the two; physically he's locked away in a room for months on end, while mentally he's living out a grand tale as he works on a manuscript.

I grew up in Ohio, also. What are some of your favorite places to visit in the Buckeye State?


The Cleveland Flats are always fun. Or any number of Amish restaurants with out-of-this-world cuisine. My favorite place is probably the Canal Fulton Public Library, because it was there where I fell in love with reading. A nerd answer, I know.


I have a black belt in ju-jitsu. And I once hunted the most dangerous game . . .


Check out my website (www.jaredsandman.com) to learn about my other books. My blog is a hodgepodge of whatever's rattling around in my head, and I always try to make it entertaining for others.


Thanks for having me. It's been great. 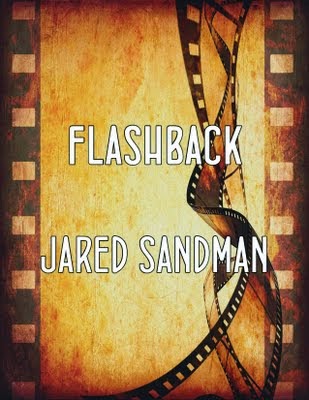 In the annals of Hollywood cinema, the name Gregory Kincaid is as synonymous with Jack the Ripper as Bela Lugosi to Dracula. He portrayed the infamous serial murderer in half a dozen films, spanning a five-decade career filled with monster movies and sci-fi schlock. Twenty years ago, weary of celebrity's harsh spotlight, he withdrew from public life, never to be seen again -- until now.

After a wartime accident seriously injures journalist Jenny Pearce, she turns her attention to reporting entertainment news. More comfortable on the frontlines than the red carpet, she jumps at the opportunity to track down the notoriously reclusive Kincaid.

The damaged pair forges an unlikely friendship, working together to write the actor's memoir. Except someone doesn't want Kincaid's tell-all all told, somebody who aims to protect secrets best left buried. Fighting for their lives, Kincaid and Pearce are forced to unravel a murder mystery gone unsolved for over seventy years.

Excerpt from Flashback, by Jared Sandman