Love, Identity, Transformation: Or, Why I Love Retellings by Lacey Louwagie, author of 'Rumpled'

Love, Identity, Transformation: Or, Why I Love Retellings

Like many children, I grew up on fairy tales. My sisters and I wore out our “The Little Mermaid” picture book long before Disney offered its rendition. My mom, younger sister, and I all sniffled together when we finished “The Little Match Girl.” And my older sister, with a slight inclination toward the macabre, recited for me “Bluebeard” and the “real” “Cinderella” (in which the stepsisters cut off pieces of their feet). She is the one who introduced me to “Rumpelstiltskin” by acting it out in our basement playroom with Fischer Price Little People. The story captivated me so much that I would eventually go on to spend three years on my own rendition of it (Rumpled).

My inclination toward retellings started young. My older sister and I had a “writing club” which consisted of us sitting at a card table in the basement writing and illustrating stories. When I finished one, she accused it of being too close to the plot of “The Little Mermaid” (the original). She then informed me that plagiarism was against the law. Too bad I didn't yet understand the public domain!

I read my first retellings when I was about 14, and I started with Arthurian legends. By happenstance, I started to notice that the same characters showed up in different books by different authors. The unexpected familiarity of it delighted me, as if I were meeting old friends when I entered a book rather than needing to form attachments to brand new characters. I also loved discovering what each author's “take” on the story was: what was happening behind and between the scenes that formed the pillars of the original plot?

I didn't attempt to write my own retellings until after I'd been reading them for about fifteen years. During that time, I was absorbing what made the best retellings: unique “angles”—something unexpected in a story the reader thinks she already knows, something that will never let the reader look at a story quite the same way again, something that makes sense of the strange turns of events in myths and fairy tales—which are, in themselves, meant to make sense of the strange turn of events of life.

I no longer worry about not being “original” enough, because now I realize that all writing really IS telling the same stories over and over again—the stories that matter most to us as human beings. Every story I've ever written is about transformation, about a soul on a journey to find love and identity. Every story is about someone who, after encountering certain experiences, can never be the same again.

Fairy tales hint at all the mysteries of the universe; they convey messages about the times in which they were written even as they impart themes that remain universal. By retelling these stories, we join a long and honorable tradition of keeping alive the secrets of life: love, identity, and transformation. 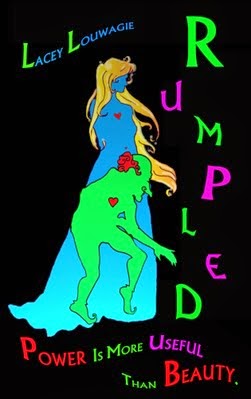 Gold for a poor girl,
Beauty for a twisted man,
A child for a powerful sorcerer . . .

Rumpelstiltskin can change anything he touches into gold, but he cannot change his own twisted body. The sorcerer Laurus can make Rumpelstiltskin tall, strong, and handsome—but he will only work his magic in exchange for a child in its first year of life.

When Emily’s deluded father claims she can spin straw into gold, the King demands proof. Caught between a mad father and a mad king, Emily’s life hangs in the balance. Rumpelstiltskin will help keep up her ruse for three nights—if she promises him her firstborn child.

When the King decides to marry Emily, the pretense must continue for much longer. And what Emily offers Rumpelstiltskin in return for his continued help has the power to change everything.

This retelling of “Rumpelstiltskin” is best suited for ages 14 and up.

Every night, we spent three hours together after the rest of the palace had gone to sleep. The first two hours, I taught her to calm her mind, to feel and direct the magic we all carry in our bodies, to memorize the incantations. I explained to her that neither the straw nor the gold thread were significant to transmutation. “I simply used what you'd been given to create something that matched the expectation. But once you learn to transform one substance to another, you can create thread from dust or rocks or a pile of dung. Or you can create coins or buttons or parchment, for all I care. The principle is the same, regardless.”

But despite Emily's dedication, I could not coax a single transmutation from her hands even after weeks of teaching. One night, in frustration, I said, “Perhaps if you feel what happens when I transmute . . .”

I rummaged around my room until I found a length of cord. I took one of her hands and placed it atop my own, both hands palms down. Then I bound our wrists together and reached for the empty glass upon my desk. As I attempted to transmute it into a block of gold, Emily gasped and tried to jerk away at the feel of the power passing through my fingers. I dropped the glass before the transmutation took hold, and it shattered upon the floor.

“You see?” I said. “This is painful, Emily. If you want to learn this, you mustn't fear it. Respect it, yes, but don't fear it. Magic is like a wild horse; if it senses your fear, it will trample you.”

Emily was trembling, her eyes fixed upon our knotted hands. My anger dissolved at the sight of her slender, white hand cupped over my own gnarled, hairy one. It was then that I realized I'd mirrored the simple hand-fasting wedding ceremonies the peasants employed. With my other hand, I transmuted the cord into rose petals that softly fell away from our wrists, setting her free. 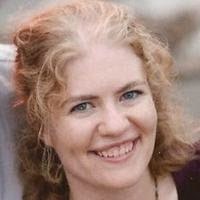 Lacey has been writing since she was old enough to hold a pencil and fold a few pieces of paper together. Her first book, full of pictures of unicorns, started her on the path of writing science fiction and fantasy. She has worked as a freelance writer and editor, magazine editor, reporter, and librarian. She lives in a tiny house in South Dakota with her husband, two cats, a dog, and hundreds of books.