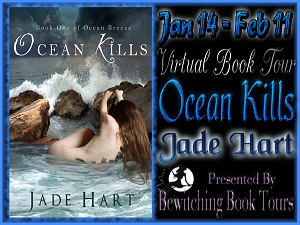 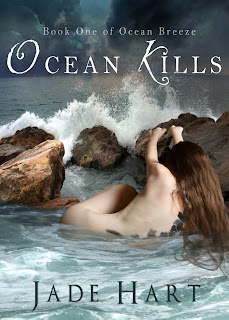 Ocean Kills
Ocean Breeze Series Book One
Jade Hart
Genre: new adult sexy urban fantasy
Word Count: 97,000
Book Description:
Around the world, murderers and rapists pick off the innocent. Killing loved ones, separating families, and ruining lives.
As an eight-year-old girl, Ocean witnessed her family’s massacre and something altered inside her. Twisting her genetic code… unlocking an ability to teleport.
Ocean Breeze was never destined to be normal, especially being named after air-freshener. She’s a shadow, a ghost—a dark savior of the innocent. Armed with a switchblade in her bra, and a box-cutter in her pocket, she hunts the filth of the world.
Callan Bliss is a Sydney Police Officer whose skill set is far above a normal cop. All his fellow officers see is a hard-worker who loves to catch perpetrators and surf, but that’s because they don’t know his past. When Callan arrests a suspicious looking prostitute, coming face to face with a self-confessed vigilante, his secrets aren’t that easy to keep silent anymore.
Ocean hates the police with a passion, and has no intention of being held captive by a cop, even if he is sexy as hell. Teleporting from under his nose, Ocean hunts her next target—a man responsible for the largest sex ring in South Africa—and he’s about to die. But she doesn’t count on Callan giving chase, nor the body-quaking lust which consumes them. However, Ocean's dark hobbies take precedence over what her heart wants—her thirst for murdering is killing her too, and not even Callan can save her.

The premise and the beginning of this book reminded me a lot of Dexter. I am a fan of both that book and TV series, which lured me to take on this book tour. Both characters were "born in blood" as they witnessed the brutal murder of family members and sat in blood for days until the police finally arrived. Both are vigilante killers, seeking revenge for their lost innocence and then unable to stop. Both are adopted by a father figure who embraces them for who they are, yet also tries to help them to better cope. Both have difficulty with their relationships.

But Ocean is different. She loses more and more of herself the more that she seeks her revenge in life. She also has this ability to teleport, adding a fun paranormal twist to her story. You feel sorry for her past, but sometimes wonder if you really like her or not.

Her story is action-packed, which keeps you up reading, even though the book is quite long. The narration alternates between her and Callan telling the story. That allows for an extra level of intimacy while also providing multiple points-of-view. I will be interested to read the next one! 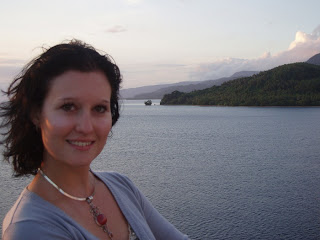 Author Bio:
Jade Hart is a self-confessed book worm who is happiest glued to a lap-top with an eternal battery life, and typing up stories running rampant in her head.
Her three favorite things are:

1. Unlimited books on an Ebook Reader

2. Cracking the sugar on a creme brulee

Jade currently resides in Middle-Earth, but has lived in Australia, England, and Hong Kong.