Interview with Etta King, Author of the Caspian University Novels 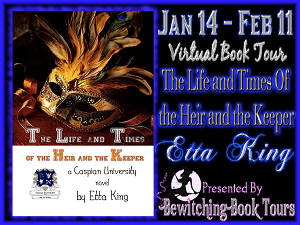 Today, I would like to thank author Etta King for taking some time out of her busy schedule to stop by and let us get to know her and her books better.
What was the inspiration behind this book and series?
Well, I was inspired by my freshman year in college; it took me by surprise, how so much could happen in so little time. There were parallel stories in my year and that laid the foundation for the series and the way these books are being written. The first book, The Life and Times of Elizabeth and the Duchess, was written from the perspective of the girls in this series, Elizabeth and Judith. This book, The Life and Times of the Heir and the Keeper, is more so the guys’ story. Jonathan and Francis get their time in the limelight and, if I do say so, they have as much drama as the girls. The entire series will chronicle their college experience, from start to finish, as each character grows or even stays the same. Once I had the idea, the story just kept building and my imagination basically ran wild. I enjoy writing about these characters; they are like old friends that I can come to at any time, and, even better, I discover new things about them each time.

Which character was clamoring the most to be written?

Francis, definitely, just wanted to tell his story. I started out with no plans for him and he simply burst out of my pen. Everything from his idiosyncrasies to his desires came to me as I wrote; I could see him smiling into the empty kitchen at his vampire mug or walking down Lexington Avenue in Manhattan at breakfast at his favorite place. He plays a huge role in the series and he’s grown from the few pages he features in, in the first book.

To which character do you most relate?

I would have to say Jonathan; he’s different, he doesn’t just do the things he’s supposed to do, he doesn’t fit a mold. He has his secrets and they affect who he is more than even he realizes. I think most people would be surprised to discover that I do research at a cancer center or that I’m planning on applying to medical school. I definitely see a little of me in Jon.

If you could turn your series into a TV show or movie series, which actors would you like to play each role?

Oooh, I love this question! I’d always imagined Chace Crawford as Jonathan, but I’m not set on that so that may change. Logan Lerman as Francis, Lucy Hale as Judith and Zendaya Coleman as Elizabeth.

Your bio says that you like to literally put pen to paper, before typing out your stories. I do the same, as I crave that multisensory approach to life. What is it about the handwritten aspect of the stories that appeals so much to you?

I think it’s more that the story comes easier to me than while I’m staring at a screen; I’ve been writing for a long time – 10 years now…wow, I’m 23 – and I spent most of that time actually writing on paper, with a pen. Part of it was the fact that I was usually writing in odd places; in the car, in school, in my bed…it was what I did when I had a spare moment. So, I think actually putting pen to paper is more comfortable for me; it’s something I’m used to doing.

A story should only be as long as it needs to be to tell the story. I’m not sure who told me this, but I believe it is sound advice. Another one was more of a story from an author at a Young Writers Convention I went to in high school. She told us that she completes her stories because she knows she has to. It isn’t easy and while the story might be on replay in our minds, it takes a certain degree of determination to put it all out there.

My favorite book is Emma by Jane Austen (she reminds me of myself, going from one misadventure to the next calamity, but she finds love in the end, so yay!) I love a lot of books and I generally love equally; I enjoyed Lisi Harrison’s These Boots Are Made for Stalking as much as I did Dead And Gone by Charlene Harris and Jodi Picoult’s The Pact. I don’t think I necessarily have a favorite author.

Honestly? ExamKrackers’ MCAT Physics Review. Yes, it’s what I’m up to at the moment. But soon, it’ll be over and I’ll catch up on Suits and watch the final season of Gossip Girl and read the stack of books currently sitting on my desk (The Girl Who Played With Fire, Ruthless, The Carrie Diaries and How To Teach Filthy Rich Girls)

Well I’m working on a short medical drama on the side, but I’m not sure where that will go. We’ll see… I’m also halfway through a vampire trilogy – yes, everyone needs a vampire tale haha – and at the beginning of two unrelated young adult novels.

What are some things that fans may be surprised to learn about you?

Well I already let out the MCAT/Med school secret, so I suppose the fact that actually don’t like writing classes and never took one. I think writing should be about emotion and imagination, and that technique should be cultivated not memorized. If I were an actress, I wouldn’t be a method one. 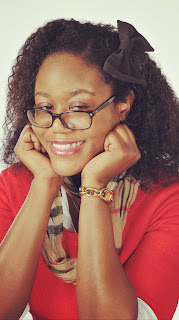 Etta King is the author of the Caspian University novels, a series chronicling the life and times of a group of wealthy teens who inevitably discover the various flavors of college drama. Etta writes from her personal experiences as a college co-ed and as the product of an all-girls prep school. Here she witnessed the very eccentricities and foibles which she depicts in her novels.

In a home filled with books, it was no surprise that Etta grew to be an avid reader, and that translated into writing when she was thirteen. She wrote simply for the fun of it, whatever would come to mind, from fantasy to thriller to romance, and shared her stories with her friends.

In 2010, at twenty-one and just as she was about to graduate from college, Etta began writing "The Life and Times of Elizabeth and the Duchess." This was a story which had first taken shape in 2008, after her freshman year, but had been put on hold. With graduation looming, Etta recalled the characters, and the events which had inspired them, and took pen to paper. Literally, as Etta enjoys writing out her stories before typing them out. Soon the first book had been completed and the series was born.

"The Life and Times of the Heir and the Keeper," comes as the sequel to "Elizabeth and the Duchess," and serves as the second semester of these teens' college saga. Etta is currently working on the third book, in what will be an eight-part series.

Etta King lives with her family in Westchester, New York. 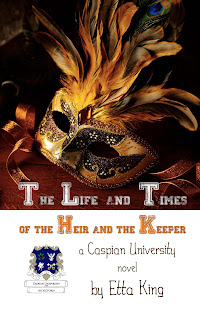 They say college is a lot of things; a haven, a four-year party, the place you met the girl – or guy – of your dreams. What they don’t tell you is, the best part of college is the drama YOU bring to the table! After all, that dirty little secret, that not-so-little white lie, and those texts you wish you could erase from cyberspace can’t stay hidden forever. At CU, someone’s always watching, and you better hope there isn’t a camera phone on hand when you get caught.

It’s the Spring Semester, but it’s not all fun in the budding sun for Jon and Franz. Follow them as they delve through the politics of secret societies, the inevitable drama of the F-word (that’s FAMILY, for the uninitiated), creepy Resident Advisors, creepier residents and girls who don’t always say what they mean. Who wouldn’t need two months to recuperate?

Book One The Life and Times of Elizabeth and the Duchess Kindle\ Paperback
Posted by Andi at 12:00 AM