I want to thank Andi’s Book Reviews for having me today. I thought I’d do something a little different so I created a winged vampire warrior recipe, servings: one!

But first, I thought I’d tell you a little bit about my paranormal romance work. I have six books published with St. Martin’s Press for my Guardians of Ascension series as well as one novella, BRINK OFETERNITY, published in July of 2011. For my Blood Rose series, which also features vampires in the lead roles, I self-published EMBRACE THE DARK last May. Both of these novellas are bundled in the release I’ve called: VAMPIRE COLLECTION. In entirely different ways, BRINK OF ETERNITY and EMBRACE THE DARK, explore the sexy mystique of the warrior vampire, each over-burdened by the responsibilities of his job and in need of the love of a good woman. 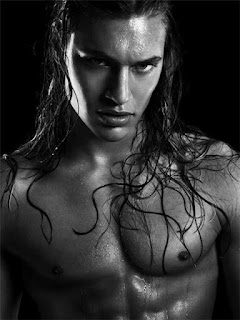 Add ingredients carefully, stirring until well-blended. Heat up the oven then bake at a high temp until smokin’ hot!

Glaze with the love of a good woman!

Warning: Serves only one! The resulting aroma may attract predator females. Might be necessary to bolt the doors and bar the windows! 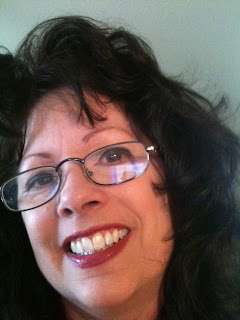 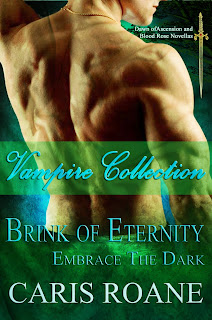 Two vampire novellas from two very different series, in the same ebook called: THE VAMPIRE COLLECTION.
The first novella, BRINK OF ETERNITY, belongs to the Guardians of Ascension series featuring winged vampires in a world of ascending dimensional earths. The second novella, EMBRACE THE DARK, is the first story in my Blood Rose series. Both novellas explore the sexy mystique of the warrior vampire, each over-burdened by the responsibilities of his job and in need of the love of a good woman.

Warrior Gideon swore he would never see Elise Jordan again even though they’d been passionate lovers for two years. Her human nature couldn’t survive in his ascended vampire world; she would be vulnerable to attack on every front if he tried to continue a relationship with her. But when Elise starts having visions of the future of Gideon’s sister hunted by death vampires, Gideon can no longer ignore that Elise is in her Call to Ascension, her call to become a vampire. Though determined to keep her at bay, the infamous breh-hedden, an all-consuming vampire bonding ritual, wraps him up tight and demands that he protect Elise. As he strives to keep her alive during her Rite of Ascension, love threatens to overwhelm his carefully ordered, war-weary world.

Gerrod, mastyr vampire of the Merhaine Realm, never thought to have his blood-needs satisfied by a mere human. But Abigail of Arizona is no ordinary woman. She stuns him with her telepathy as well as the richness of her blood. However, her human DNA makes her an unacceptable mate. Yet how can Gerrod turn her away when she alone has satisfied his blood-starvation for the first time in a hundred-and-fifty-years?

When the dreaded enemy of all realm-folk, the Invictus, attacks at a fae wedding, Abigail’s simple human life gets turned upside down. She doesn’t know if she has the courage to pursue a path that means giving herself body and soul to a mastyr vampire. Will she return to her normal existence in Flagstaff, Arizona? Or will she embrace the dark…

Everyone who purchases the “BRINK OF ETERNITY' book will receive a free copy of “Guardians of Ascension.” Simply email your Proof of purchase of “BRINK OF ETERNITY' to Caris and she will send you a free e-book of Guardians of Ascension. Here is her E-mail carisroane@gmail.com .
a Rafflecopter giveaway
Posted by Andi at 12:32 AM
Labels: giveaway, guest post, Innovative Online Book Tours, vampires