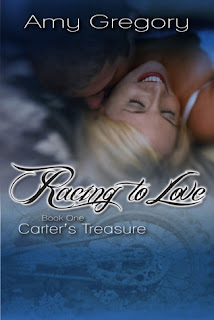 Molly West had everything, beauty, brains, and a career in the limelight.

In a sport that was male driven, she was often surrounded by men. She ignored first the boys, and as she got older, the men.

That is until she walked into the pits.

From the moment he saw her, he Carter had an overwhelming need to protect her.

He learned a long time ago that gut feelings are almost never wrong.

I picked up this book in anticipation of reading its sequel for an upcoming book tour. Each book can stand on its own, but I do enjoy checking out an entire series in order when possible. I like the motocross as the background story, for an interesting change.

I enjoyed it as a quick romantic read with a little bit of mystery thrown into it. The relationship between Molly and Carter does reach an intense level at a very quick pace that feels almost unrealistic. I'm not sure how often people who have just met and feel that level of attraction will actually touch each other so much. I do think it is possible to innately trust someone right off the bat, as Molly does Carter. With the horrors in her past, which are slowly revealed throughout the book, these feelings of trust have even more significance.

I admit that I hated how Carter calls Molly "Gorgeous" all of the time. That seemed to calm down as the book went on. I know the goal was to emphasize her low self-esteem.

Molly's brother, Brody, is a serious pain who has some anger issues. As the past is revealed, you begin to understand why he is so over-protective of his little sister. At the same time, you do still want to throttle him for being such a jerk.

To me, the final message of the novel was that love can triumph all and help you overcome any difficulties in your past. It leaves you with a warm and fuzzy feeling.