'Your House Is on Fire, Your Children Are All Gone' by Stefan Kiesbye 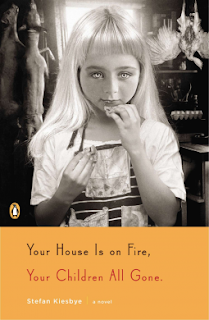 This Halloween, Penguin Books is excited to publish Stefan Kiesbye's spooky new novel YOUR HOUSE IS ON FIRE, YOUR CHILDREN ALL GONE about a haunted German village and the children who are the guardians of its secrets.

Shirley Jackson meets The Twilight Zone in this literary novel of supernatural horror about a village called Hemmersmoor, a place untouched by time and shrouded in superstition.  YOUR HOUSE IS ON FIRE, YOUR CHILDREN ALL GONE is told from the point of view of its children (Christian, Martin, Linde, and Anke) who grow up in a claustrophobic world of ancient superstitions, pagan rituals and wartime secrets.  The town's main buildings are its grand manor house whose occupants despise the villagers, the small pub whose regulars speak of ghosts, and the old mill no one dares to mention.  This is where the four young friends come of age, in an atmosphere thick with fear and suspicion.  All too soon, their innocent games bring them face-to-face with the village's darkest secrets-which will never let them go.

This eerily dispassionate, astonishingly assured novel is evocative of Stephen King's classic short story "Children of the Corn" and infused with the spirit of the Brothers Grimm.

About the author:
Stefan Kiesbye has an MFA in creative writing from the University of Michigan. Born on the German coast of the Baltic Sea, he studied in Buffalo, New York, and now lives in Portales, New Mexico where he teaches creative writing at Eastern New Mexico University and is the arts editor of Absinthe: New European Writing.  His stories and poems have appeared in numerous magazines and anthologies, and his first book Next Door Lived a Girl won the Low Fidelity Press Novella Award and was praised by Peter Ho Davies as "utterly gripping," by Charles Baxter as "both laconic and feverish," and by Robert Olmstead as "maddeningly powerful."