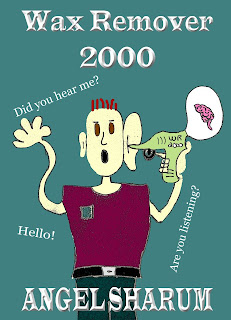 Harry always thought a little hearing loss helped his marriage, especially considering his wife was always complaining. But after Harry couldn’t hear Joyce’s cries for help one night, he realized if he wanted to stay married he better do something to fix the problem.

A miracle cure, that he might need a miracle to survive.

“I don’t need no hearing aid,” Harry said. “I heard you perfectly fine that time.”

He knew the reason he heard her was that she had yelled. He was sure Martha and John next door had heard her.

“You don’t hear half what I say to you!” Joyce proclaimed. “Sometimes I think you don’t get a hearing aid on purpose, just so you don’t have to listen to me.”

Harry smiled, but he was smart enough to turn away before Joyce could see it. There was no telling what she’d do to him if she knew there was any truth to her remark. And it wasn’t that he never wanted to listen to Joyce, it was just that she was always talking.
Harry needed peace and quiet sometimes, and though he’d never admit it to anyone, especially Joyce, his hearing really wasn’t what it used to be. He could go all day and hardly be bothered by anyone, which wasn’t a bad thing in his opinion.

He jumped about three feet into the air and spun around to find Joyce in his face. “You scared me half to death!”

“I said your name four times. You didn’t hear me.”

“I was thinking,” he said, trying to get her off the hearing thing. “I wasn’t paying attention.”

“You never pay attention to me.” Joyce pouted and walked away without telling Harry what she wanted.

I didn't really like to read short stories before I got myself hooked on my friend Angel Sharum's stories. I am hard-pressed to find one that I don't like!

This one started just as a cover idea, which then morphed into a comical short story with a dark twist to it. I already knew what was going to happen before I even read it, because of discussions about it during the creation process. That didn't stop me from shrieking out loud at the end of it, though!

If you have a dark, twisted sense of humor, you are going to love this story! And it's only 99 cents!

Writing short stories allows her to take readers on journeys of imagination that linger beyond "The End" and poetry offers a way for her to shake up people's emotions and make them think. According to Angel, when she accomplishes her goals a truly special connection exists between her and her readers.