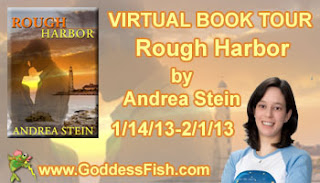 Get to know author Andrea Stein a little better in her Q&A with me.

What was the inspiration behind 'Rough Harbor'?

Rough Harbor was my attempt to write a book that was a contemporary romance with a hint of suspense. Plus I really wants to write a story set on the water. I grew up on the north shore of the Long Island Sound, swimming, sailing and taking long walks on the beach. Queensbay the setting of Rough Harbor is my way of creating an idyllic place where couples can fall in love. I tried to write it as a place readers would want to visit since there are more books coming in the series. I also really love the character of Caitlyn. She's twenty eight and has achieved some professional success so in my mind she's a real person, ready to face the tragedy if her past and find out if Noah, her high school love was the one that got away.

Which character was the most fun to explore during the writing process?

While I love my heroine Caitlyn Montgomery – she’s a smart, savvy career woman with some baggage in her past, I had a lot of fun writing Adrianna Biddle – she’s another smart, savvy woman, but in her sixties. She’s a combination fairy godmother and grandmother that Caitlyn never had.

To which character do you relate the most?

Caitlyn – she’s about 28, which is younger than I am but I feel like she’s had enough experience with work and life to be interesting. She’s not fresh out of college, and she’s very smart business and investment-wise –that’s not my area of expertise but the feelings of being interested in her career and accomplished are something I relate to. And though I never got to spend a semester in Paris, I did live abroad and the experience was really life changing – you have to learn to live alone, make new friends, navigate a new culture.

If you could turn the book into a movie, which actors would you choose to play the various parts?

Keira Knightly would be Caitlyn and Gerard Butler Noah Randall. And perhaps I could get Shirley MacLaine for the part of Adiranna Biddle – not sure how long her guest stint on Downtown Abbey will last.

What is the best way to mend a broken heart?

Wine, chocolate and finding something to get interested in – but not a new man!

Tall, dark and handsome…while I do like tall, looks probably aren’t as important as someone who’s interesting, has a sense of humor – but has evolved a bit beyond the Old School style of comedy. Someone who enjoys being social, as I can start to feel like a hermit if I don’t get out too much. I’m not that outdoorsy so I don’t necessarily need the outdoorsy type. I think I’d probably go for brains over brawn.

If you could be a character in any book, which one would you be?

Claire Randall in Outlander – time travel, while confusing sounds pretty cool and even though she always gets into a lot of trouble she always finds a way out of it.

What projects do you currently have in the works?
I am working on the second book in the Queensbay series - the setting for Rough Harbor, featuring the story of Chase and Phoebe. Chase is born and bred in Queensbay, while Phoebe is a transplant from Hollywood. It should be out in early February 2013

What is your favorite book and/or author?

Like most authors, I probably have too many to name, and they change over time. But I am a big fan for the simple romantic suspense of Mary Stewart, like her book, The Moonspinners. I love the Outlander series, Gone With the Wind and then there are some of my early favorites – The Swiss Family Robinson - which is the one book I would take with me if stranded on a desert island and Wuthering Heights.

I was on my college sailing team – even though I went to college in New York City – we used to hike our way up the Hudson and sail near Sing Sing prison. There was always the fear that a) you would get some terrible disease from the polluted river waters if you fell in, or b) if you sailed too close to the prison you would get shot out because the guards would think you were part of a prison break…

Thanks so much for the chance to drop by! 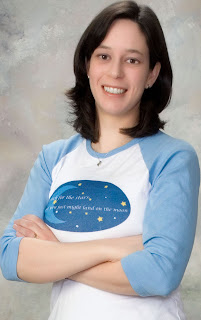 Hi, I’m, Andrea Stein an author, mother, wife and blogger and a certified mom-chauffeur. I have been scribbling stories for as long as I can remember, including my first adventure story, inspired by an obsession with Out of Africa (book, movie and biography) about a young girl stranded in Kenya. It was serial fiction handwritten, given to my sister, who couldn’t read my handwriting. That story dies after one installment, but the next year I got a word processor (not a computer, but an ACTUAL WORD PROCESSOR) that showed about twenty lines of text at a time. This was before laptops were widely available and this allowed me to be able to type to my heart’s content in the privacy of my own room. Which I did. I think I spent the time writing stories about my “frenemies” to amuse myself. I also listened to a lot of the Cure and New Wave music. I have since moved on to a happier place.

Even though I read lots of different types of books, I write romance novels with a twist. More like contemporary romance than romantic suspense (I don’t write about serial killers or FBI agents) but I usually like to include a puzzle or mystery for my hero and heroine to solve.

Other than writing I spend most of my time reading, watching TV, cooking, cleaning, taking care of kids, trying to keep the house clean and folding laundry. I love Twizzlers, chocolate and shows on the WB. For me, reading has always been an escape, a way to escape the ordinary and dive into a world that feels real – but with all of the ‘boring’ parts edited out.

As for the rest of my life, I grew up on Long Island, spent a lot of vacations in small New England towns, went to college in New York City, married by high school sweetheart, worked, had kids, stopped working, and kept on writing. Now I live in rural New Jersey (yes, there is such a thing), and though I don’t own any horses, I do have a barn, which I share with squirrels.

There’s something successful writers always tell new writers about their secret to success. Just do it…Bum Glue…write 1ooo words a day…write for two hours a day….Keep writing. And they’re right. I got more successful with my writing when I started to do it consistently. I don’t write every day, but I shoot for five days a week. This means that the words and pages pile up — and I have stories to shape, make and mold…and share.

I hope you enjoy my books, currently available at www.amazon.com


Andrea will be awarding a $50 GC, winner's choice of Starbucks, Amazon or Walmart, to a randomly drawn commenter during the tour. Follow the tour for more chances to win!
Posted by Andi at 3:30 AM
Labels: giveaway, Goddess Fish, interview, romance