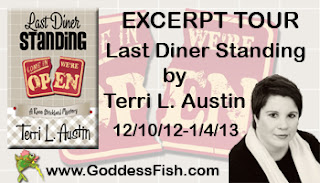 Welcome to the excerpt tour for Last Diner Standing by Terri L. Austin! Here you will find an exclusive excerpt from this book. Follow the tour for even more sneak peeks! 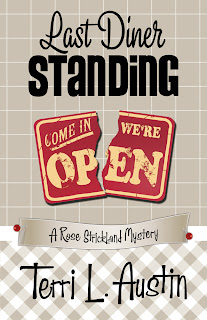 Rose Strickland is having a blue Christmas. Her friend is arrested for attempted murder, her sexy bad guy crush is marked by a hit man, and her boss is locked in an epic smackdown with a rival diner. Determined to save those she loves, Rose embarks on an investigation more tangled than a box of last year's tree lights. With her eclectic gang at the ready, Rose stumbles across dead bodies, ex-cons, chop shops, jealous girlfriends, jilted lovers, and a gaggle of strippers in a battle for freedom she might not survive.
~~~~~~~~~~~~~

Thomas Malcolm Sullivan. Criminal numero uno in Huntingford. The man who held markers on the most powerful people in town, including the police chief, Martin Mathers.
Despite the cold, my hands felt clammy as I grasped the phone in one hand. I hadn’t seen Sullivan in five weeks, even though he’d called five times and sent flowers twice. At first, our conversations were short and to the point, but the last two times, we’d spoken for almost half an hour. We never discussed anything too personal, at least he didn’t. Now every time I saw his name on my screen, my pulse sped up.
“Hello.”
“I hear you’re missing a car,” he said.
“Good news travels fast.”
“Do you need a ride?” His voice was smooth and rich, like that first cup of coffee early in the morning. My brain went to a whole different kind of ride and got stuck there for a moment.
“Well, I do have band practice after school and an appointment with my orthodontist.”
“I’ll take that as a no. How’ve you been holding up?”
“I’m fine, and frankly getting pretty tired of people asking me that question every five minutes. I’m not made of glass. I won’t break.”
Nothing from his end. He liked to pull that crap, long pauses and dramatic silences to make the other person talk first. I waited him out. But I did glance at my phone twice to make sure he hadn’t hung up.

This book actually had me laughing out loud in some places. Rose is sassy and so are her friends. They get themselves into all kinds of ridiculous situations while trying to solve the mystery of who really put "Asshat" into the hospital. I would love to read more of her [mis]adventures! 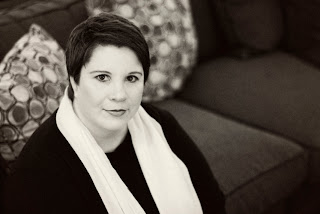 “Austin’s debut kicks off her planned series by introducing a quirky, feisty heroine and a great supporting cast of characters and putting them through quite a number of interesting twists.” Kirkus Reviews

Terri will be awarding one commenter at every stop a signed bookmark and a cover postcard (USA/Canada Only), and one randomly drawn commenter on the tour will receive a $25 gift card to Amazon or B&N, winner's choice. Follow the tour for more chances to win!
Posted by Andi at 3:30 AM
Labels: excerpts, giveaway, Goddess Fish, mystery