How to Create the Perfect Paranormal Man - Guest Post by Stacy Gail, Author of 'Nobody's Angel' 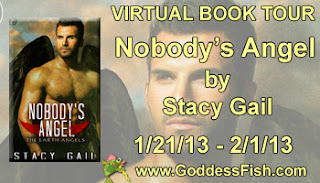 Before we begin, I’d like to thank Andi for allowing me to cruise by and chat about NOBODY’S ANGEL, my latest release from Carina Press, and the first book in The Earth Angels paranormal romance series!


Question: What’s your idea of the PERFECT paranormal man? Is he the lone-wolf wanderer? The strong, silent type? A domineering alpha-hole?


For me, my obsessive love for the paranormal hero began early—like nine or ten years old—when I picked up my first X-Men comic book and found Logan/Wolverine. Oh my stars, this superhero was amazing! He had the bad-boy attitude. He didn’t play well with others. He had a dangerous past he couldn’t remember. And, oh yeah, he was positively drowning in unrequited love for Jean Grey/Phoenix. What’s not to adore about this guy?


Ultimately, though, it was the unrequited love facet that snagged my interest the most. Come to find out, it’s not all that easy to create a hero who also happens to be a superhero. Fictional heroes are tough enough, but superheroes are that much more difficult to relate to on an average human level. After all, I have no clue what it’s like to be faster than a speeding bullet, and my clairvoyant abilities have yet to show me any winning Lotto numbers (though I do keep trying :P). Paranormal heroes need to be relatable. They need to be grounded in some facet of reality that everyone’s familiar with. One surefire way to that?


Zeke Reece, my hero in NOBODY’S ANGEL, is unique; he’s a member of the Nephilim, a nearly extinct race of human-angel hybrids. That alone isolates him to an almost unbearable level, but in addition to that he lives under the constant threat of a heavenly smackdown for simply existing. He trusts no one and is obsessed with keeping his corner of the world problem-free, and though he tells himself it’s because he doesn’t want undue attention thrown his way, the truth is that he’s got a highly developed sense of justice. And who could blame him? He didn’t ask to be born as part of the Nephilim, and he hasn’t done anything wrong, yet it’s widely known his race is unloved and unwanted. Thanks to this, Zeke knows all too well about what’s fair, and what isn’t.


But to make him even more relatable—more human—there had to be something everyone could feel and experience along with him. Enter Kendall Glynn. Right out of the gate, Zeke is torn between wanting to protect her from a supernatural threat that has targeted her, and wanting to get closer to her for another reason entirely. But he knows he’s a winged freak that would no doubt disgust and horrify her, and that anyone who becomes close to him gets pulled into the shadowy world of the Nephilim. It’s his internal battle—and the raw yearning for the woman of his dreams—that humanizes him completely, and when things are at their very worst, it’s his love for Kendall that allows him to be at his very best.


I loved creating Zeke and all his complexities, as well as matching him with a woman who was strong enough to keep up with him. But the question remains—in your opinion, what is YOUR idea of the perfect paranormal man?


A competitive figure skater from the age of eight, Stacy Gail began writing stories in between events to pass the time. By the age of fourteen, she told her parents she was either going to be a figure skating coach who was also a published romance writer, or a romance writer who was also a skating pro. Now with a day job of playing on the ice with her students, and writing everything from steampunk to cyberpunk, contemporary to paranormal at night, both dreams have come true. 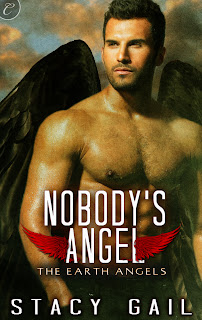 
Book one in The Earth Angels

Investigative journalist Kendall Glynn is horrified when a friend and colleague signs off permanently during a live newscast, jabbing a pen into his jugular. Kendall's no expert, but judging by the strange white veil in the anchorman's eyes, she would swear he was a man possessed.


A descendant of the accursed Nephilim, Zeke Reece prowls San Francisco by night, keeping the city free from paranormal phenomena. But even he is no match for whatever malevolent force is behind a recent rash of murder-suicides. And when a beautiful tenacious reporter becomes the next target, Zeke has no choice but to stay close to her, until he can find the evil spirit and cross it over.


The closer Kendall gets to the truth, the more danger she's in. Fortunately, a sexy and mysterious masked stranger keeps swooping in to the rescue. Kendall's life depends on finding who or what is responsible for the killings, before it finds her.

Stacy will be awarding a $25 Amazon GC for the grand prize; and second prize is a Zazzle mug with cover art on front, plus a Starbucks Via coffee pack (US only) to two randomly drawn commenters during the tour. Follow the tour for more chances to win!
Posted by Andi at 3:30 AM
Labels: angels, book promo, giveaway, guest post, paranormal romance