'Holding Off For a Hero' Super Book Blast 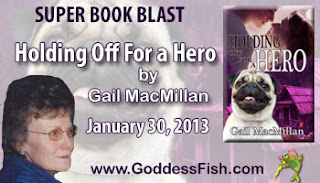 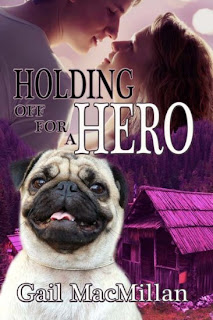 Holding Off For a Hero
by Gail MacMillan

Beautiful, vivacious Emma Prescott has a love-'em-and-leave-'em reputation. Fact is, Emma's holding off for a hero. When she moves to a cabin at wilderness Loon Lake and meets her one neighbor biology professor Frasier MacKenzie, he's still just another guy, even with his killer blue eyes and body that just won't quit...until he rescues her and her Pug from one danger after another. Then he definitely falls into hero territory. But the professor has no intention of filling the role of white knight in Emma's life. All he wants is to be rid of her and her annoying little dog so he can get on with his research. In fact, he's ordered to get rid of them whether he wants to or not. Looks like Emma may have to go on holding off for a hero...
~~~~~~~~~~~~~

She floored the gas, and they took off with a squealing of tires.

“I’ve got a ton of things to do back at the cabin. You see,” she continued, quieting and sounding sly, “I’m having a party tonight. I have to get ready.”

Ah, man, that just about tears it.

“Actually, a bachelorette bash. One of my teacher friends is getting married next week, and a bunch of us decided we’d give her a real whing-ding of a sendoff…up at my cabin where there’ll be no witnesses. Teachers and the likes of myself have reputations to think of, you realize.”

She cast him a wicked glance.

“So there’ll be music and a lot of noise and…”

The Professor’s blood pressure would skyrocket when he gave him this information.

“Couldn’t you have it somewhere else? Like a male strip joint in town?”

“Didn’t you hear what I just said about teachers and others of that ilk? We can’t be seen parading into one of those places. Our superintendent would suspend every last one of us. Anyway…” She looked over at him. “I don’t see why it should be such a big deal for you. You don’t have to keep banker’s hours. If the noise bothers you, stay up, watch a video, and sleep in on Sunday morning.”

“Okay, okay, but will you please keep your eyes on the road? And slow down! There’s a speed trap somewhere along…”

Behind them a siren wailed.

“Quick!” she ordered, pulling over as the police cruiser rolled alongside. “Hunch over and clutch your chest!” 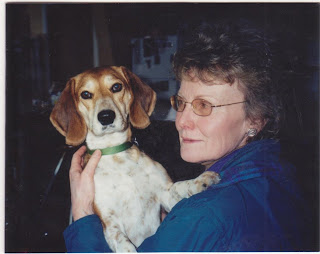 Gail MacMillan is a three-time Maxwell Award Winning writer and author of 26 published books. A graduate of Queen's University, she lives in New Brunswick Canada with her husband and two dogs, Fancy a Little River Duck Dog and Bruiser the cover guy and hero of Holding Off For a Hero.

Gail will award two $5 Amazon GCs and three digital copies of "Lady and the Beast" to randomly drawn commenters during the tour. Follow the tour for more chances to win!
Posted by Andi at 3:30 AM
Labels: book promo, excerpts, giveaway, Goddess Fish, romance