'Heels & Heroes' by Tiffany Allee is here! Take a moment to get to know the author better before you purchase her book!


What was the inspiration for 'Heels and Heroes'?

I remember watching the X-Men cartoon series when I was in middle school until it ended, near the time I finished high school. I was absolutely addicted to the series, and even bought a few X-Men comic books. This was the start of my love of superheroes, and the beginning of my inspiration to write about this type of hero.

I love romance, and the idea of a romance between superheroes sounded like a blast. While Heels and Heroes is much lighter in tone and a bit more focused on romance than the average comic book, I have tried to capture some of the fun of following the lives of super humans who put themselves on the line for others.

I loved writing Justice, the heroine’s love interest and the leader of the local superhero league. He’s a superhero down to his core—confident and strong. But he’s also experienced tragedy in his past, and it has left its mark.

To which character do you best relate?

I relate best to the heroine, Brenda—or Silencer, as she’s known among superheroes. While she’s technically a superhero, she’s not much different from the average person. She’s successful and confident in her day job as a pharmacist, but lacks that confidence when she puts on her superhero uniform.

The third of my Otherworlder Enforcement Agency series, Lycan Unleashed, releases this month. It follows a Chicago Paranormal Unit detective, Astrid Holmes, as she tries to clear her name after evidence is stolen under her watch. Of course, she has to work with a hunky ex-friend, almost-lover to prove her innocence and catch the real villain.

I’m currently drafting the fourth book in that series, and I’m finishing up final edits on a light paranormal romance to be released through Entangled Publishing’s Covet imprint early this year.

What makes the ultimate superhero?

The ultimate superhero is the person who is willing to go out there and put herself on the line day in and day out, regardless of how powerful her special ability.

If you could have any superpower in the world, which one would you choose?

I’d love to be able to fly. The most useful power? Maybe not. But it sure sounds fun!

Who are some of the superheroes in your life?

My family, for their support and for inspiring me. My husband for the same reasons, and also for making me laugh on a daily basis. And on a lighter note, my critique partner, Regan Summers, because she saves my ass on a daily basis. ;-)

There are others, but too many others to mention in one blog post!

To sit my butt in a chair and write. That’s the one constant. No matter what else you do, without writing, writing, and more writing you won’t get anywhere.

What is something that readers may be surprised to know about you?

I am a secretly a superhero.

What? You can’t prove that isn’t true!

I just want to say thank you for having me here today! 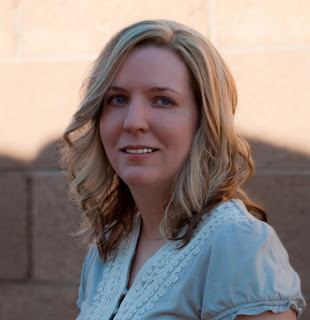 About the Author:
CPA-turned-romance-author Tiffany Allee used to battle spreadsheets in Corporate America, and now concentrates on her characters’ battles to find love. Raised in small-town Colorado, Tiffany currently lives in Phoenix, AZ, by way of Chicago and Denver. She is happily married to a secret romantic who tolerates her crazy mutterings.
She writes about ass-kicking heroines and the strong heroes who love them. Her work includes the suspense-driven Otherworlder Enforcement Agency series which revolves around a group of paranormal cops solving crimes and finding love, and Don’t Bite the Bridesmaid, a lighthearted paranormal romance (Entangled Publishing).
Tiffany has an MBA in accounting and nearly a decade of experience in corporate finance. All super useful stuff for a writer who spends far too much time trying to figure out fun ways to keep her characters apart, and interesting ways to kill people (for her books—of course!).
Website: http://tiffanyallee.com/ 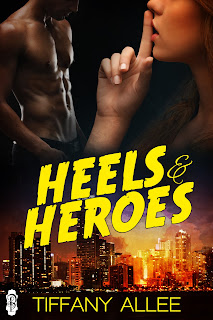 Brenda is a second-rate superhero, normally more concerned with uniform fashion than defeating bad guys. But when a violent, new super villain declares war against her city, she suddenly finds her specialized power to deafen sound in high demand.

As if facing the destructive force of a new enemy isn’t bad enough, she finds herself paired with the powerful, yet emotionally distant, Justice. Forced to work at the side of the only man who gets her heart pounding, Brenda is not only in danger of losing her life in battle, but also her heart to a man who might not be able to love her back.
Read an excerpt:

“You think only some superheroes are real?” he asked, shock rushing through him.
“Justice,” she said, after glancing around to make sure they were alone. “There is a difference between real superheroes like you who have the power to save people from villains on a regular basis and people like me. My powers, such as they are, don’t make me any different from Maria and other normal people. Yours do.”
“You think it’s the powers that separate us?” Before he realized what he was doing, he was up from his chair and standing only inches from her. Her face was turned away, and she had to look at him so he could make her understand. He touched her soft skin with his fingertips, tipping her chin up. A scowl cut across her full mouth at his touch, but she didn’t move away.
“Isn’t it?” Her voice was soft, caressing.
It took a moment for him to remember what they were talking about.
“It’s not our powers that separate us—make us heroes. Yes, us,” he added as she started to shake her head. “It’s the willingness to put on the uniform. To face things that might be stronger than ourselves in order to save other people. And the lack of power you’re talking about?” Her skin brushed against his as he leaned in to whisper. “That lack of power is what makes you a real superhero, Brenda, because you’re willing to fight in spite of that fact.”
She turned her head, mouth parted to argue with him, to deny what he could so clearly see. Bringing his face down inches from hers, he grazed her jawline with his knuckles. She swayed toward him, gaze fixed on his mouth. She licked her lips, and the last bit of control he’d clung to broke.
Her lips were soft—so soft—and after a moment’s hesitation she kissed him back with a zeal he hadn’t expected. The sweet smell of strawberries filled his nose, and it occurred to him on some level that the intoxicating scent was probably her shampoo. He reached for her, touching her back with his hand, needing to get closer, to feel her body on his. She pressed against him eagerly, and her mouth opened. Soft and wet, her tongue caressed his.
Suddenly he couldn’t think about anything but her. The way she’d filled out her tight, little uniform. And the sexy confidence she donned with her conservative blouse and slacks. He hardened painfully in his uniform, and she moaned. The small sound made every muscle in his body tighten. He didn’t care that they were practically in public. He had to have her. Now.