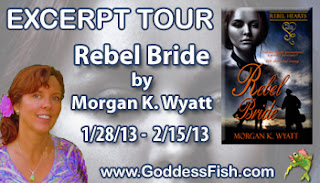 Welcome to the Excerpt Tour for 'Rebel Bride' by Morgan k. Wyatt! Each stop along this tour will have an exclusive excerpt for you to read. Thanks for stopping by! 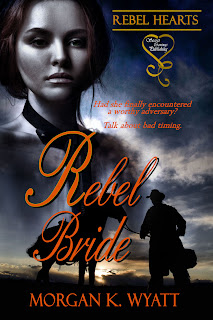 Eileen Sewell sparks plenty of gossip by spiteful matrons and their horse-faced daughters that she’d find herself alone due to her picky ways. Of course, she didn’t believe them. Then again, she also didn’t expect to be a mail order bride either. It wasn’t easy snagging a husband who hadn’t heard about her willful nature. Eileen finally gave up hope of finding love, and decided to settle for whatever she’d find out west. If that wasn’t lowering enough, she’d just witnessed the first train robbery. Unfortunately, the outlaws saw her too. Enter Marshal Colt Sheppard, who excels at extracting information from reticent witnesses. His crooked smile and broad shoulders shouldn’t charm her. She’d played this game before, only she never had a worthy adversary. Talk about bad timing.
~~~~~~~~~~~~~

The man shouted. It sounded like he said, “roll,” which she did since the rails laid on an embankment. Scraggly plants, clumps of dirt, and rocks poked her as she rolled over them. A small squirrel-like critter watched her wide-eyed from his mound as she bounced by.
A large rock stopped her wild descent, a rather pointed rock. Eileen stood, rubbing her aching backside. Her hands smoothed down her body to ascertain everything was still in place. Even better, she’d left the robber behind on the train. She’d lost her hat in her unexpected descent, but amazingly, she managed to hold onto her reticule with its useless, heavy rock charm.
She wasn’t sure why the robber pushed her, but she didn’t appear to be dead yet. Her eyes took in the barren landscape, including her train, which seemed intent on hurrying away. Is that how they treated a war widow? A cow, or more like a half dozen of them, managed to stop the train, but a war widow thrown from the train gets nothing. She didn’t go quietly, she screamed, more than once.
Of course, she’d been pushed from the train in the middle of the plains with no signs of civilization in any direction. Her sister Emily definitively possessed more survival skills than she did. Her obsession with tagging after Gray and Townsend had paid off in learning how to build a fire and fish. Those skills helped her to survive while searching for Gray. Who knew survival skills were also a desirable trait for mail-order brides? She’d make it, somehow. How hard could it be with John out of the equation? 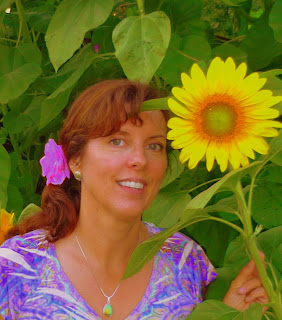 Morgan as a child had to suffer through movies with clueless heroines rescued by smart men. Her mother dutifully read her stories where princesses waited for princes to jumpstart their lives. There were no proactive female role models in the media at that time, with the exception of Wonder Woman. It is for this reason, and that it is fun, Morgan writes about strong women going after what they want.

She has a blog about dating after forty on www.datingafterfortyeight.blogspot.com

She also reviews book for Novelspot and blogs about writing at: www.novelspot.net

You can find Morgan at www.morgankwyatt.com


Morgan will be awarding a $5 Amazon GC to a randomly drawn commenter at every stop. Follow the tour for more chances to win!
Posted by Andi at 3:30 AM
Labels: excerpts, giveaway, Goddess Fish, romance