Jennifer Malone Wright, author of the bestselling 'Vampire Hunter's Daughter' series has reimagined her novel 'The Birth of Jaiden.' 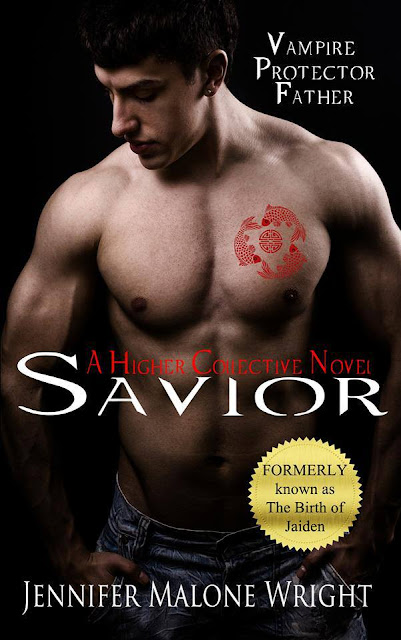 Savior is formerly known as 'The Birth of Jaiden' by Jennifer Malone Wright, it has been re-edited, a little bit of new content added and given a new name and new cover.

Description:
Savior (A Higher Collective Novel)
Alexander Lucas is a man of faith, casino owner and vampire. He should be living the Reno high life of riches and immortality. Instead, he wakes each night despising the blood on his hands and begging for a reason to continue on.

The last beat of his heart took place shortly after losing his family to a gruesome and violent death. One snowy night, the creature who had been stalking him finally took his life, in turn giving him the gift of immortality. Yet, immortality to Alex is not a gift, but rather a curse to live in eternal pain.

Nearly a century of tortured existence leads him to a dumpster in a dark alley where he finds a reason for continuing on. Nestled between bits of debris and rubbish a tiny infant wails for help. He calls for his best friend and guardian angel, Danielle, who explains to him that he has been chosen to raise this baby, for she would someday become a very powerful, natural witch. She tells him it is now his job to protect her from the enemy who wants her so badly, yet also to be her father.

Thinking this angel is out of her mind, Alex refuses many times until Danielle convinces him that the enemy, Malcolm and his wife Levine, cannot obtain the child and that they are, indeed attempting to find her. He must keep her safe, because if evil hands raise her than she will grow to possess the power to annihilate them all. 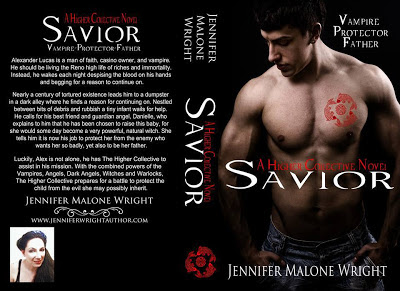 I read the original book, 'The Birth of Jaiden.' At the time, I admit that I didn't like it as much as TVHD, but I was still intrigued. The concept of a Christian vampire who still prays to God for forgiveness for what he has done was something new and different that I really liked. I liked the chemistry between Alex and Isabella. I fell in love with Jaiden. Even as a baby, she has a pull about her. Great things are going to happen in the future!

I was fortunate to receive a Beta copy of 'Savior,' which is TBJ reimagined and updated. I know that not significant amounts have changed, but somehow I liked it so much better this time around. I can't really put my finger on what changed for me. I think Alex's voice comes through more, for one thing. Or, maybe it is just that I have developed more of a love for paranormal novels since I started with Jennifer's earlier work.

This is a good choice for anyone who loves to read about vampires, but is looking for a different voice and twist in the main character. I look forward to reading more in this series, and hopefully soon! I have been waiting for a follow-up since I finished the original book so long ago! 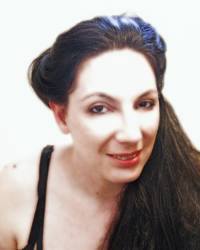 She resides in the beautiful mountains of northern Idaho with her husband and five children where she practices preparing for the zombie apocalypse. Just kidding!

But seriously, between the craziness of taking care of her children, Jennifer has little time left for herself. The time she does have left, usually leading far into the night, is spent working on her beloved fiction or chatting with her equally crazy friends.

Jennifer also loves coffee, has a passionate affair with red bull, wishes the sushi were better where she lives and dances while she cleans.

a Rafflecopter giveaway
Posted by Andi at 11:36 AM