Review of 'Her Sister' by Karen Rose Smith 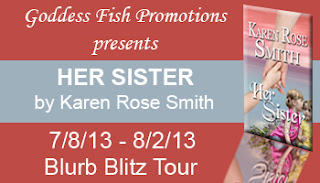 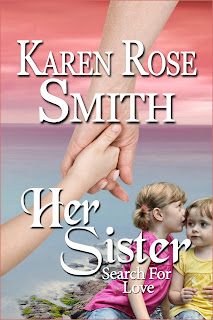 Clare's little sister, Lynnie, was abducted twenty-seven years ago. Now the retired detective who has never been able to let go of the cold case has a lead. Lynnie could be alive!

Clare's mom, Amanda, thrown together again with her ex-husband into a crisis discovers forgotten love beneath the regrets.

Clare's sixteen year old daughter, Shara, decides to run from her problems instead of facing them.

A devoted sister, a turmoiled mom and a rebellious daughter find their way back to each other in this contemporary ebook about three generations who discover love can knit their family back together again.

Where is Lynnie? Where did she go?

In her mind, five-year-old Clare Thaddeus called to her little sister—Come back, Lynnie. Please come back.

The huge policeman crouched down in front of Clare's mother at the sofa and said in a deep, slow voice, "Mrs. Thaddeus, I know you're terribly upset. But I need details. We've got an hour before daylight. If your daughter wandered outside—"

Clare's father, who'd been talking to another man in blue, glanced at her, and Clare huddled down deeper into the big green armchair. Her dad didn't come to her but rather went to her mom, sank down beside her and wrapped his arm around her. Then he spoke to the officer. "Our daughter, Lynnie, is three. She would never go outside into the dark on her own."

"Tell us again where you were last night," the policeman demanded in a not-so-nice voice.

"I worked late, preparing a brief."

"Yes, until five a.m. As I told you, I always check the girls' rooms before turning in. Lynnie wasn't in her bed. I woke my wife. We looked through the whole house and then we called you."

Clare had been sleeping in her brand new room. They'd moved in here—she studied her hand and counted her fingers—five days ago. Boxes were still stacked down here and upstairs. The house was okay. There were more rooms for her and Lynnie to play hide and seek. But she didn't like being alone in her own room at night. She'd liked it better when she and Lynnie had slept in the same room. She was supposed to watch her sister. She was always supposed to look out for Lynnie. That's what big sisters did.

Reading this book was an enjoyable way to spend a couple of hours on a hot summer day by the pool. Shara's disappearance parallels Lynnie's abduction some years before. It is a blessing in disguise, as it helps to bring this shattered family back together. Mothers remember the importance of being in touch with their daughters. Relationships both new and old reinforce the idea of leaning on loved ones in times of crisis. Not all stories like this can have a happy ending, especially when it has been so long since a child was abducted. But, we can always hope ... 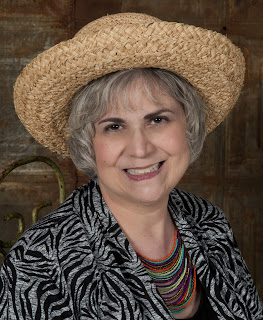 Award-winning author Karen Rose Smith was born in Pennsylvania. Although she was an only child, she remembers the bonds of an extended family. Since her father came from a family of ten and her mother, a family of seven, there were always aunts, uncles and cousins visiting on weekends. Family is a strong theme in her books and she suspects her childhood memories are the reason.

In college, Karen began writing poetry and also met her husband to be. They both began married life as teachers, but when their son was born, Karen decided to try her hand at a home-decorating business. She returned to teaching for a while but changes in her life led her to writing romance fiction. Now she writes romances and mysteries full time. She has sold 82 novels since 1991.

Married to her college sweetheart since 1971, believing in the power of love and commitment, she envisions herself writing relationship novels, both romance and mystery, for a long time to come!

Karen will be awarding a Landau charm bracelet and a $25 Amazon Gift Card to a randomly drawn commenter during the tour (US ONLY). Follow the tour for more chances to win!
Posted by Andi at 3:30 AM
Labels: book review, giveaway, Goddess Fish, mystery