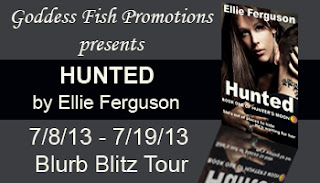 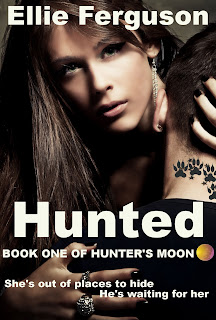 When Meg Finley’s parents died, the authorities classified it as a double suicide. Alone, hurting and suddenly the object of the clan’s alpha's desire, her life was a nightmare. He didn’t care that she was grieving any more than he cared that she was only fifteen. So she’d run and she’d been running ever since. But now, years later, her luck’s run out. The alpha’s trackers have found her and they’re under orders to bring her back, no matter what.

Without warning, Meg finds herself in a game of cat and mouse with the trackers in a downtown Dallas parking garage. She’s learned a lot over the years but, without help, it might not be enough to escape a fate she knows will be worse than death. What she didn’t expect was that help would come from the local clan leader. But would he turn out to be her savior or something else, something much more dangerous?

I turned my attention to my host, relieved my brain was finally starting to work. He’d moved across the small kitchen and, with his back to me, was staring out the window over the sink. Watching him, my jaguar stirred--as did a lust I’d not felt in a very long while--and I swallowed hard. Long muscular legs led up to one of the finest examples of a male ass that I had seen in a very long time. They led up to a narrow waist and broad shoulders. Then he turned and I fought the urge to lick my lips.

My jaguar was so close to the surface, I was surprised to look down at my hands and not see the shift starting. I’d felt drawn to other males of our kind before. There were too few of us for our animals not to be attracted to one another. But this was different. Never before had that pull been so strong. If I had to guess, my cat not only recognized his shifted form but she was willing to admit his dominance and that was something she had never done before.

No, that wasn’t quite right. It wasn’t that she recognized his dominance. She recognized him as her equal and that was--interesting. It was also a complication I didn’t need. Nor did I need him guessing what was going through my head. That would be more than embarrassing.

I’m older than 20 and younger than death and that’s all you’ll get from me about my age. After all, it’s not polite to ask a woman how old she is. I’m a mother, a daughter and was a wife. I’ve spent most of my life in the South and love to travel. The only problem with that is my dog always thinks I’ve abandoned him when I do and it takes weeks to reassure the poor thing and my cat resents the fact I came back before he could figure out a way to kill the dog and hide the body. My house is haunted — it is, really. I swear it. What else explains the table that plays music and the light that comes on by itself? — but it’s mine and I love it. Okay, I’m a little strange. But that makes life interesting.

If you enjoyed Hunted, please check out my other titles available through Naked Reader Press:

All she wanted was her morning coffee and sugar laden cereal. That's all. Was it too much to ask? Instead, she gets the surprise of her life and a new appreciation for the thickest phone book she could find.

Every teacher has had that one student she can't seem to get through to. Worse, there always seems to be that one set of parents who feel their little darling can do no wrong. That makes the mandatory parent-teacher conferences an exercise in endurance. But what happens when the conference becomes an exercise in survival?

Weddings always bring out the worst in people. Or at least that's the way it seems to Jessica Jones as her younger sister's wedding day approaches. It's bad enough Jessie has to wear a bridesmaid dress that looks like it was designed by a color blind Harlequin. Then there's the best man who is all hands and no manners. Now add in a murder and Jessie's former lover -- former because she caught him doing the horizontal tango on their kitchen table with her also-former best friend. It really is almost more than a girl should be expected to handle. . . .

Ellie will be awarding a digital copy of her romantic suspense novel, Wedding Bell Blues to a randomly drawn commenter at each stop during the tour. Follow the tour for more chances to win!