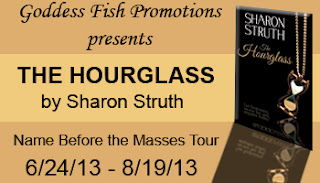 Please give a warm welcome to author Sharon Struth today. She spent some time answering my questions about herself and her book 'The Hourglass.' Feel free to add your own comments and questions below!


What was the inspiration behind 'The Hourglass'?

The characters and their story came to me while in the middle of writing another book. While their story mirrors things I’ve had to deal with in my own life (mostly related to alcoholism and suicide) it’s really a story about hope, moving on with your life and forgiveness. The story is about finding and reaching out to the positive forces in our lives; letting go of the past. I write about these topics with gentle humor and a “real” human perspective. I’m an optimistic person, which I believe is reflected in the story.

CJ Morrison. I felt like he wanted me to understand him. Not judge him based on the man I started to write about, but dig deeper to find the caring man who suffered some deep wounds.

How much do you have in common with the main character, Brenda McAllister?

Well, we both own a scruffy terrier, grew up with an alcoholic parent and possess a need to over-analyze everything. Oh, a few friends suggested that Brenda’s reaction to CJ when he ignores her sounds at their first dinner sounds a little like me. Maybe . We lead very different lives. I’m happily married and have a wonderful, supportive husband and don’t have any of the drama in my life that Brenda faces.

The scene where Brenda and CJ meet unexpectedly at Dale’s house for dinner. Every time I read that scene, I fall in love with CJ all over again.

What kind of research did you need to do for this book?

I researched racecar driving (CJ can be a thrill seeker or sorts) and corporate crimes, which fascinated me because I worked for over twenty-five years in finance and accounting before pursing a writing career full-time.

Romance and mystery make for a hot combination. What is it about this genre that is so compelling for writers to create and for readers to devour?

I seem to fit some suspense into all my stories. Both genres create tension, of a completely different nature, but they play well off each other.

By writing a story that stands apart from the crowd. I honestly believe my book is a little “different” than most you’ll find on the shelves. Publishers sometimes go to same story/different characters…guarantees an audience. Anything that is off a beat is a risk for them. When Etopia offered me a contract for The Hourglass, I could tell right away that they understood my story and weren’t trying to jam it into a previously sold formula.

Prior to writing a novel, I dabbled in shorter non-fiction essays about life and the lessons I’ve learned. I appear in five Chicken Soup for the Soul books, A Cup of Comfort for New Mothers and Sasee Magazine. My agent is currently trying to find a publisher for my next novel, Share the Moon.

You live in Connecticut, which is a beautiful state. What are some of your recommended destinations for visitors?

Connecticut may be the third smallest state in the nation, but it offers a variety of places to visit. From the coastal shoreline of the Long Island Sound to the stunning lakes and rolling hills of the Northwestern part of the state to major metropolitan areas like Hartford and Stamford, a visitor can see a lot without long drives.

While The Hourglass is set in the affluent “Gold Coast” of Connecticut, (Fairfield county along the Long Island Sound), my next book, Share the Moon, explores small town life in a lakefront community set in the lovely New England countryside. I happen to live in a delightful smallish town, where everybody knows everybody and I’ve never felt more at home. 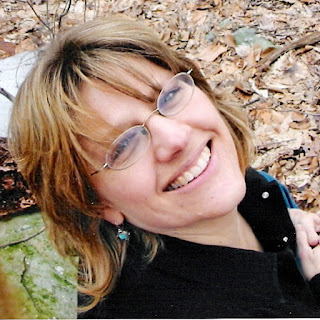 Novelist Sharon Struth believes you’re never too old to pursue a dream. The Hourglass, her debut novel, received first place in the Dixie Cane Memorial Contest and second place in the Golden Heart. She writes from the friendliest place she’s ever lived, Bethel, Connecticut, along with her husband, two daughters and canine companions. For more information, including where to find her published essays, please visit http://www.sharonstruth.com.

Blogs at "Life in the Middle Ages” http://www.sharonstruth.wordpress.com 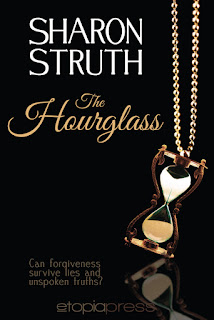 The Hourglass
by Sharon Struth

Until Brenda McAllister’s husband committed suicide, she appeared to have the ideal life: a thriving psychology practice, success as a self-help author, and a model family. But her guilt over her affair with Jack’s best friend prevents her from moving on. Did Jack learn of her infidelity? Was she the cause of his death?

The release of Brenda’s second book forces her into an unexpected assignment with arrogant celebrity author CJ Morrison, whose irritating and edgy exterior hides the torment of his own mistakes. But as she grows closer to CJ, Brenda learns she wasn’t the only one with secrets—Jack had secrets of his own, unsavory ones that may have led to his death. While CJ helps Brenda uncover the truth about her husband, she finds the path to forgiveness isn’t always on the map.

An unexpected gravitational pull swelled Brenda’s anger. Her cute quip ran into hiding. She no longer cared about winning this man’s favor. His rudeness left her feeling as if she’d been doused with hot coffee this time. Brenda clenched her fists. A year of internal browbeating over Jack’s suicide had left her easily irritated.

Brenda gripped the frail edges of her self-control. “I once again offer my apologies for the accident, by definition an unplanned event with lack of intent.” He looked down his sturdy, Grecian nose at her, so she stood and put her hands on her hips. “Shouldn’t you, as a writer, know that?”

Every line on his face tensed. “I could do without your sarcasm.” He leaned closer. “Thanks to you, I missed my meeting. Maybe tomorrow morning you could get room service.”

The brunette unleashed a tight smirk. CJ motioned for them to move on.

Brenda fumbled for a good retort. As he stepped away, the last word went with him. The same way Jack had the last word in their life together. A silent explosion went off inside Brenda’s head and propelled her anger forward.

“Mr. Morrison?” She raised her voice to be heard above the crowd.

He looked over his shoulder and arched a questioning eyebrow.

Brenda crossed her arms and fixed a phony smile as she nodded toward his companion. “It’s so nice of you to bring your daughter to the conference.”

Sharon will be awarding a $25 Amazon GC to two randomly drawn commenters during the tour. Follow the tour for more chances to win!