'Even Rock & Roll Has Fairy Tales: The Flight of the Shiny Happy Sherry Fairy' by Sherry Carroll 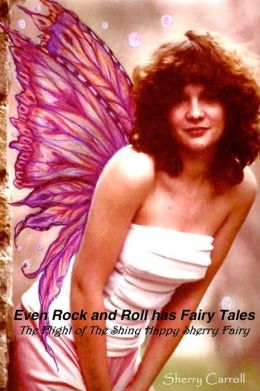 Once upon a time there was a little girl who dreamed…who became a Fabulous, High -flying, Infamous Fairy! And reached the brightest stars and took a crazy 30 year trip on the cracked carousel they call Rock and Roll. Spinning dizzily around and around, going nowhere, way too young and much too fast, but still loving every turn, twist and shout. Scrawny, ordinary, unpopular teen-aged misfits like me were not typical groupie material, meant for radio superstars. I was just a naive small-town girl next door who never dreamed hanging around the stage door at rock concerts would ever get me anything more than the occasional autograph. However, the Rock and Roll Royalty that came into town had a very different opinion of my wild red curls, sprinkling of freckles, electric energy, and one-hundred-pound dancer’s body than the boys next door... I was blinded by the spotlights, mesmerized by the music, and addicted to the madness, mayhem, and most of all, the extraordinary men who made it all happen. Once backstage I ceased to be unnoticed and unappreciated and became the Shiny Happy Sherry Fairy, with a wild side, a wicked wit, and a way with both men and words, taking flight with the biggest, brightest stars in the best bands in the business. But none bigger and better than Eric Burdon, a gorgeous, sexy singer almost twice my age, when we met , the charming and charismatic front man of the classic British Invasion band The Animals, and a living legend, having the biggest year of his career with his massive comeback in 2013. This is one of the true life “ Fairy Tales” I lived ,of my adventures in the “glamorous” world backstage at rock concerts beginning in the late seventies and how it all came crashing to a spectacular, unbelievable halt one unforgettable weekend 30 years later. So follow me over the barricades, past the security, through the backstage door, inside the dressing rooms and behind the hotel room doors.

With the sounds of Rock and Roll and Sherry’s intoxicating laugh moving you though every memory—you’re sure to be captivated by this one-of-a-kind, episodic memoir.

Leaving you with the idea that dreams, no matter how ridiculous, are worth pursuing—because they just might lead to some mesmerizing music, interesting men, and hot adventures. Sherry is ridiculously fun, smart, and sassy. Her memoir, overall, is funny, fast-paced and episodic.

Five/Fiver stars for this one-of-a-kind memoir!