A chat with Victoria Bernadine, author of 'A Life Less Ordinary' 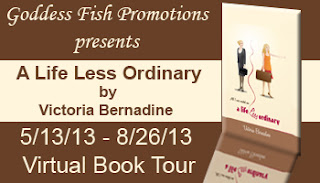 What was the inspiration for 'A Life Less Ordinary'?

Hi Andi – thanks for hosting me today!

The story began as pure wish fulfillment. I was feeling exactly like Manny and wanted to run away from it all. I couldn’t actually do that, so I decided to write about it instead.

How did you come up with the title?

The first sentence of the book (“All I ever wanted was a life less ordinary.”) is something I’ve said (in a mournful, pathetically whining tone) many times to friends and to myself. It just seemed to fit the story.

I love all the characters, but I’d have to say that Manny (naturally) spoke to me the most, since I was using her journey as personal wish fulfillment, a way to have some fun at a time when I was feeling very weighed down by my job. So, whenever I wondered what Manny should do next, I’d think of something I wouldn’t want to do and then I’d have her do it. LOL

Another tough question...Zeke and Manny’s first meeting still makes me giggle. The scene where Manny’s trying on a bikini makes me groan and laugh and say, “oh, GOD, this is so true!” Any scene where Zeke and Manny are getting to know each other. Any scene which illustrates the bonds between Manny and Daisy (her sister) and Rebecca (their best friend). The whole book, actually...not that I’m biased or anything...*cough*

Oh, boy. Where to start?? I have a sequel to A Life Less Ordinary in the works. I’ve been looking at three old stories (Historian’s Daughter; Plugs and Aliens/Ghosts) to see if I can make them good enough/long enough to release as actual books. I’ve also been distracted the last few months by an adorable plot bunny that’s attached itself to my ankle – a sorta romantic sorta comedy about a woman who’s a recluse, and the man who accidentally, er, ‘borrows’ her identity for a while after his long term girlfriend dumps him. At least, that’s the plot for right now...who knows what the characters are going to decide to do?? o.O

You suffered from writer's block for 20 years. How did you finally break through it?

I didn’t deliberately do anything to break through the writer’s block. I was (and am) a fan of fanfiction, and in 2008, one of my favourite shows (Jericho) went off the air after 1.5 seasons. I went searching for fic dealing with my two favourite characters (Major Edward Beck and Heather Lisinski). I found some great stories and writers, but not nearly enough...so I began to write my own stories because I wanted something to read. And man, words can NOT describe how awful those first scribbles were. But it felt so good to be writing creatively that I just kept doing it.

The key, for me, was that I didn’t worry about what the ‘final product’ would be like, because (at the time) there was no ‘final product’ (because WOW – BAD!!). It truly was the journey not the destination that was the joy. Now, of course, I worry about both, but not while I’m writing. For example, the stories I talked about above may never see the light of day, or I may only ever make/keep them available online for free. That doesn’t really matter to me as much as the bliss of creating the things.

Do you have any advice for fellow writers suffering from the same?

The only advice I have is to just keep writing, even when you feel blocked. A sentence, a phrase, anything, really, because sooner or later, something will trigger the creative flow. Write what you feel like writing, not ‘what’s next’ in the plot (if you have one). Also, don’t worry if what you initially write isn’t perfect – that’s what editing is for!! :D

Free-flow writing may not work for everyone, but it definitely worked (and works) for me!

In what genres do you like to write and why?

I tend to write romantic comedy and post-apocalyptic fiction (sometimes with a strong romantic bent). I seriously don’t know how those two genres go together...

Yes, because I love reading romantic comedy, and I have a special love for post-apocalyptic fiction (I blame Stephen King and The Stand, which was the first post-apocalyptic novel I remember reading, and the one against which I judge all others).

Also no, because those aren’t the only genres I read. I read everything (although I’m not a particular fan of Serious Literature or erotica) because a good book is a good book. I’m currently on a Louis L’Amour/western kick (just finished Mojave Crossing) so if anyone can suggest some more current/modern western authors I could check out, I’d appreciate it! LOL

I wish I was disciplined enough to do the research for historical novels (romance or otherwise) and smart enough to write mysteries, thrillers and really complex science fiction or fantasy...but alas. (Although who knows what plot bunnies are going to attack me tomorrow??)

When you reflect back on your own life, would you change some things in the past? Or do you believe that those past experiences make you who you are today, and you wouldn't change them?

Very good question...There are two things I would definitely change if I could; both have to do with men – LOL. For the most part, though, I think our past experiences make us who we are. But I’ve lived a very fortunate life (and that’s not a complaint! (cringes and looks around at the Universe)). I’ve known many people, however, who haven’t been so fortunate, and I would change their experiences if I could/they wanted me to.

Thanks for hosting me today and thank you to everyone who comments! I’ve been having a blast with promoting this book, and I hope everyone continues to follow along until August 26th. I’m looking forward to continuing to market this book, and to eventually getting my next one out there! :D

Thank you for having me! 

Victoria Bernadine (a pseudonym) is, as the saying goes, a “woman of a certain age”. After twenty-something years of writer’s block, she began writing again in 2008. She began with fanfiction about a (now-cancelled) TV show called Jericho and particularly about the characters of Heather Lisinski and Edward Beck. From there, she expanded into writing original fic and she hasn’t stopped since.

Victoria enjoys reading all genres and particularly loves writing romantic comedy and post-apocalyptic science fiction. What those two have in common is anybody’s guess.

She lives in Edmonton with her two cats (The Grunt and The Runt). A Life Less Ordinary is the first novel she felt was good enough to be released into the wild.

Victoria can be contacted through Love of Words Publishing Inc. (loveofwords@shaw.ca) or through her brand new blog at http://victoriabernadine.wordpress.com/. 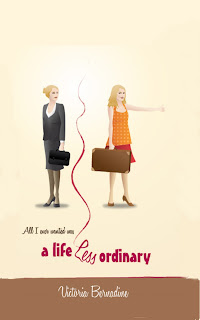 For the last fifteen years, Rose “Manny” Mankowski has been a very good girl. Now, at the age of 45, she’s questioning her choices and feeling more and more disconnected from her own life. When she’s passed over for promotion and her much younger new boss implies Manny’s life will never change, something snaps. In the blink of an eye, she’s quit her job, sold her house, cashed in her pension, and she’s leaving town on a six month road trip.

After placing an ad for a travelling companion, she’s joined in her mid-life crisis by Zeke Powell, the cynical, satirical, most read – and most controversial – blogger for the e-zine, What Women Want. Zeke’s true goal is to expose Manny’s journey as a pitiful and desperate attempt to reclaim her lost youth – and increase his readership at the same time.

Now, armed with a bagful of destinations, a fistful of maps, and an out-spoken imaginary friend named Harvey, Manny’s on a quest to rediscover herself – and taking Zeke along for the ride.


Manny walked in her door, looking tired and feeling worn out. She wondered ruefully why the only thing not on a schedule was the time she could leave the office. She dropped her purse on the table and hung up her coat and keys. With a tired sigh, she walked into the living room and plopped into the armchair. She closed her eyes as Harvey walked out of the kitchen with a glass of white wine and began to rub her shoulders. He again looked impossibly handsome, this time wearing a sweater and jeans. She sighed in imagined bliss, and looked at him with sad eyes.
You have no idea how much I wish you were real.
In a blink, he was gone–and the phone was ringing. For a split second, Manny considered not answering it.
There’s your chance to talk to a real person, Harvey murmured.
Probably a telemarketer.
Probably Rebecca. Or Daisy. They’ll worry if you don’t answer.
All right, all right.
Manny heaved herself to her feet and walked to the phone.
Maybe I’m glad you’re imaginary after all.
She caught a glimpse of his grin as she answered the phone.
It was Rebecca, asking her to go out the next night.
“I don’t know...” Manny sighed.
“Oh, come on–you’ll have fun! And seriously–you haven’t gone out with us in months!”
“I’ve been tired...”
“You’ve been tired your whole life I think. You need to break out of this rut you’re in! Come out for a few drinks and dancing with me and Daisy. Who knows, maybe you’ll meet a good-looking guy and be swept off your feet into a red-hot love affair.”
Sounds like a plan to me.
Yeah, ’cause that’ll happen.
“I’d love to go dancing,” Manny said to Rebecca, “but the guy is just a figment of your imagination.”
“Only because you don’t put any effort into it. Seriously, it’s not healthy to do nothing but work and go home. That’s how people go crazy you know.”
“Huh. You mean next thing you know I’ll be talking to my imaginary friend?”
Harvey grinned wickedly and Manny abruptly turned her back to him.

Victoria will be awarding a $25 (grand prize) gift card with two gift cards for $15 each; the cards would for either Amazon or Smashwords (winner’s choice). Follow the tour for more chances to win!