The Ideal Writing Space by Gregory Delaurentis, author of 'Cover of Darkness' 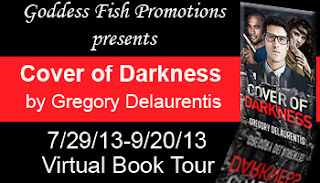 Today, I would like to welcome Gregory Delaurentis, author of 'Cover of Darkness' to Andi's Book Reviews. He is sharing with us some insight into his writing.


I have a small desk, a wide laptop, and a wide monitor surrounding me. There are hard drives on my right, humming. I am in my little world where I can put on a pair of headsets and block out all other stimuli as if I were in an isolation tank. I can see everything in my world from here in my little writing space. I can close out all sound and immerse myself in my thoughts. That’s ideal for me.
When I visited friends in Florida, I spent a lot of time writing in their den, where I sat in front of their bay window that overlooked a beautifully sculptured front yard with wonderful trees towering overhead, hanging Spanish Moss draping down like curtains, and explosions of lovely colored flowers. This was amazing to me, and I spent much of my writing time staring at such beauty, my attention grabbed by quickly flying birds zipping past. And to be honest with you…when compared to my small desk back in New York, I didn’t write much.
I wrote a lot, and in fact probably more than some writers may that enjoy such a space, but when weighed against the sheer volume of material that I can produce at home, the difference is staggering.
An ideal writing space is extremely personal, almost as personal as the blood running through our veins. It is the source of our inspiration, the center of our ideas and thoughts. If it’s one that we’re used to, it’s extremely hard to replace, although not impossible.
But whatever your ideal writing space, be it a craggy hole in a cliff face, a pasture land with a river running through it, the busy streets of New York city, or a foldable card table in the basement, may your best work come from it—work that you are proud of.

Gregory Delaurentis spent his adult life roaming from job to job, working for Lockheed in California, various law firms in New York, and financial firms on Wall Street. Throughout this period of time, he was writing—unceasingly—finally producing a large body of work, albeit unrecognized and unpublished . . . until now. Cover of Darkness is the first in a series of upcoming books that include Edge of Darkness, Pale of Darkness and Cries of Darkness. These novels follow the lives of three individuals who do battle bringing criminals to justice, while they struggle to understand the complex relationships that exist among themselves. This intriguing trio has absorbed the attention of Mr. Delaurentis for the past year and a half, so much so he decided to self-publish their stories to bring them to a wider audience. [AUTHOR’S DISCLAIMER: These are works of fiction. Name, characters, places, and incidents either are the product of the author’s imagination or are used fictitiously. Any resemblance to actual persons, living or dead, events, or locales is entirely coincidental.] 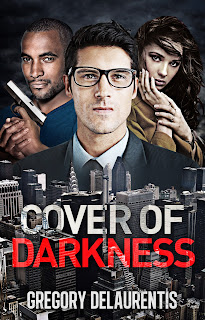 COVER OF DARKNESS
By
Gregory Delaurentis

A high profile murder of a Wall Street executive in Westchester pits three people against the criminal underbelly of Manhattan nightlife. The key players are two ex-cops turned private investigators—Kevin Whitehouse, whose sharpest tool is his keen analytical mind, and David Allerton, a former Special Forces operative—and Margaret Alexander, Kevin’s lover. In their search for a killer, they are forced to travel to the edge of sanity and morality, while stumbling onto their own confusing secrets as well. The Cover of Darkness is a gritty noir saga that untangles a web of deceit in the course of tracking down a brutal murderer.

David stopped pacing, and then started working on a rock embedded in the dirt with the toe of his shoe. “I wonder why MacDonald didn’t say anything in the interview about the cops being present. He should have told us that there were cops in the Midnight for protection—making sure the dealers were selling and not using.”

“Maybe,” Kevin ventured, “he didn’t want to drop a dime on his cop friends. Maybe he was frightened.”

“Maybe. That would have helped us a lot,” David said, his eye caught by a shapely girl on a bike riding nearby.

Margaret sat up. “That would also explain how the killer got past the gate and simply walked into the house. He could have been flashing a badge.”

“That makes some sense,” Kevin said. “And certainly cops can kill.”

“They make the best assassins, don’t they?” David quipped.

“So now this is a cop hunt?” Kevin asked.

“I would rather it end here, guys,” Margaret said.

David approached the two and stood over them. “The question is now how to hunt the most dangerous thing in New York. Crossing the thin blue line is not going to be fun or easy.”

“We can’t go to Ferryman and Reynolds,” Kevin said, nervously running his fingers through his hair, and retrieving his arm from around Margaret as he sat up. “They’ll only go on the defensive. And if the case starts turning in that direction, they’ll only deflect it.”