Review of 'Mismatch' by Nana Malone 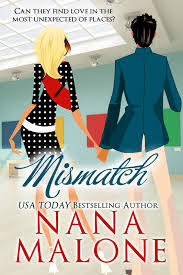 Spunky artist manager, Jessica Stanton, isn’t looking for love. She’s looking for a savior. When a business rival steals yet another of her rising stars, she’s in danger of losing everything she’s worked so hard for…and the only person who can save her fledgling business is the one man she shouldn’t want.

Art authenticator, Eli Marks, doesn’t have time for love. He’s too busy saving his brother from the demons of his drug addicted past. For the past ten years he’s cultivated a façade to keep his distance from everyone else. But when a string of high-profile art forgeries threatens the security of the only family he has left, he must turn for help to a woman who breaks through his carefully constructed façade every time she’s near.

Will Jessica and Eli save each other? Or will secrets and lies stop them from finding true love?

I got a kick out of this story. Jessica and Eli have nothing in common, other than a searing attraction for each other. And unfortunately, their relationship is built on a bunch of lies. The only truth is their feelings for each other. Somehow, though, those feelings are based on enough truth that they should be able to overcome the lies. And really, some of those lies are for the greater good! But to give that part away is to give away spoilers...

I admit that it is hard for me to believe that a girl as young as Jessica can have such a lucrative career, but she is quite determined and works hard for what she has. The mess between Eli and his brother is just crazy, but adds to the intrigue of the tale. That's part of the fun of rom com!

All three of these characters are hot! Can anyone say brotherly love? And now, I am craving art and artists...

This book made for an awesome summer read, with plenty of chuckles and romance. As soon as I was done with it, I downloaded 'Game, Set, Match,' which is the prequel to this story. Each book can be read independently of each other, but I just have to find out more about the other characters! 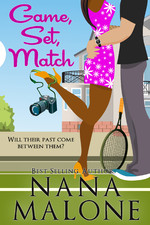 Off the court, tennis star Jason Cartwright's playboy image is taking a public beating. On the court, he's down forty-love. A knee injury is shutting down his game, and the paparazzi are splashing his love life on every magazine. A comeback is in order, but the makeover he needs to save his faltering career is in the hands of the woman he loved and left fifteen years ago.

While single-mom, Izzy Connors, sees people for who they really are through the lens of her camera, even without it, she knows Jason isn't the star he appears to be. Although his charm and good looks haven't dimmed since he broke her heart, all she sees is his wasted talent and playboy lifestyle.

Can Izzy put the past behind her and help Jason get his game, and his image, back on track? Or will the click of her camera shatter his world as well as his heart?