Review of 'I'll Be Damned' by Casey Keen 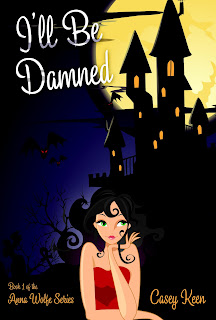 An impending war between Heaven and Hell looming around the corner.

A Grand Witch who has no idea what she is.

The Prince of Darkness’s obsession in claiming her.

As the owner of the coffee shop Deja Brew in Savannah, Georgia, Anna thought her life was ordinary. That is until her sister is kidnapped by a demon, prompting two handsome men to march into her life unexpectedly. Valen, the sinfully gorgeous, overprotective werewolf who is Anna’s sworn guardian and Roman, the most handsome and powerful Warlock in the entire Netherworld.

Suddenly, her world is stripped of everything she knows and replaced with frightening news about who she really is - a powerful Grand Witch. Now, it’s up to her to draw out her dormant magic, rescue her sister and stop an impending heavenly war threatening to eradicate the human race all while staying alive.

It happens practically every night. My pleasant dreams take on a life of their own, morphing into terrifying nightmares. They are the tsunamis of the dream ocean, spinning me in their churning tides before thrusting me awake, whereupon I find myself drenched in a pool of sweat, and gasping for air. Abandoning my worry isn’t an option since a demonic element is the driving force behind them. It sounds crazy, but even as a child, a special darkness visited me in my dreams. Is it a warning? Or a threat? Your guess is as good as mine.
They always began the exact same way - I'm being hurled into a pitch-black hole of nothingness. I open my sleepy eyes, allowing them time to adjust. Isolation surrounds me, reminding me how unprepared I am for this place. A dim, orange light cuts through the dark abyss like a blade. I squint, realizing it’s much further than it appears. I attempt to move my feet, but they stubbornly refuse. I try a second time, and manage to overcome the terror that is binding them. One step becomes two and I find myself walking at a cautious pace, listening for the faintest sound. I haven’t the slightest idea where I am, which makes me suspicious of everything. My nose wrinkles as I walk through a large pocket of air that reeks with an overpowering odor of burnt hair. I swing and wave my hands, hoping to break up the stench, but to no avail. What could be the source of such a rank smell? I’m not sure I want to know the answer. I quickly push the thought away. Curiosity can be dangerous when it comes between reality and panic.
I tread delicately, hoping no one hears me. I don’t think I'm alone, and I find some comfort in the darkness. Whatever is with me is out of my sight, and therefore, out of my mind. I never thought I would find a cliché so helpful to me until now. I wrap my thoughts around it, mustering up the courage to carry on. The orange light grows, compelling me to pick up my pace. I glance at my surroundings, unsure of what I might find. The curved, dank walls and concrete blocks beneath my feet are bare, but fortunately, no revolting creatures dangle from the ceiling or slither past my feet, although I am thinking of them! Where the hell am I? Dreams have a funny way of camouflaging life’s problems, but this is ridiculous!
A glint of light from the ashen wall catches my eye. I step closer to it, noticing how the curved cobbles gently mold my feet to their shapes. Small, rectangular stones that suggest their age goes well beyond the medieval era are arrayed in front of me. A dense tackiness catches the small granules of little dust motes that are reflected by the light here. Some kind of liquid begins to seep from one of the cracks in the stones, and I lower my head to inspect it. The crimson liquid slides sluggishly, like a snail, towards the ground. Leaning closer, I realize I’m staring at blood, and I gasp, jumping backwards. My heart thuds loudly in my chest as my adrenaline speeds through my veins like a racecar. My eyes skip around, noticing thousands of little red capillaries materializing all over the wall. An overwhelming paranoia that the tunnel will cave in torments my mind. I turn and dash towards the light, fueled by my distress. My lungs scream for air as I push myself further and faster than ever.
The orange light surrounds a large opening. Skidding to a stop, I barely avoid falling over the ledge at the cave’s entrance. I stare out at a fiery, scarlet landscape that appears infinite, and sends me a menacing warning. I lean forward when a wall of intense heat slugs me in the face, forcing me backwards a few inches. The air is dense, and it’s hard to catch my breath. Sweat beads on my brow, evaporating before I can wipe it away. I scan the ravaged scenery, watching pillars of fire erupt from the ground before disappearing into the onyx sky, rimmed in red. A chain of mountains with jagged cliffs, emerge straight up from the bloodshot dirt. Floating objects I don’t wish to know about, travel in an orbit, weaving in and out through the rough terrain. I’m in a completely different world. My terror lingers, refusing to go away. A raging river of lava slices through the valley, determined to leave its own mark in the middle of this inferno. I stroll down a steep trail that leads directly to the unusual river. I stop long before reaching its banks, and gradually inch my way closer. My eyes drift over to the whirling mass of disturbing beauty. Deep shades of red and orange mesh with each other, creating a horrid kaleidoscope of angry colors. Flashes of distorted images of my family and friends bob in and out of the blazing lava. I watch in horror as the greedy river of fire consumes them without remorse. Despite my attempts to reach in, my hand snaps back after feeling the agonizing heat. I step backwards, staring in numb bewilderment. I know I’m dreaming, but it doesn’t lessen my anxiety. My back slams into something solid and unyielding. Long, crooked fingers wrap around the tops of my tiny shoulders like spiders. Suffering and emptiness engulf me. My heart pounds like a hammer as my limbs melt into rubber. The hands squeeze me hard, sending excruciating pain throughout my entire back. The snapping of my shoulders, cracking like glass, shatters the unbearable stillness.

Similarities are that the main character has no idea that she is a witch who is destined to save the world. She is split between two powerful and beautiful men, and meets them at work. Her best friend is brought into the secret as one of her allies. A lot of the book's ambiance is similar. However, this is a book that also distinguishes itself. The plot is different enough that you are compelled to read through the entire thing. I admit that on occasion I forgot it was a different author.

Casey is extremely descriptive in her writing, using a lot of similes and metaphors. While those did pop out at me as being used quite a bit, they do help to paint a very vibrant picture in your mind. You can really see, hear, and feel the action as it is taking place. I did note a couple minor inconsistencies in the characters' preferences along the way, but nothing that dramatically changes the story.

Anna is a likeable character. She is headstrong and eases into her role as much as she can. Kristy feels like a typical best friend, though her own secrets need to be further explored. Martello, her gay male best friend, is a bit over the top. I can completely picture him and the way that he behaves, though I admit his way of talking ("You gots to be kidding me.") bugged me a little bit. (Can you tell I am from the North?) Her family definitely is hiding a lot. I can't believe they managed to hold onto all of the secrets that they are hiding! So much more needs to be revealed.

Roman sound sexy, but a little too manipulative for my taste, though an excellent teacher. I definitely prefer Valen. He is sexy and powerful, without being overly cocky.

All in all, this was a fun paranormal romance. For those of you who don't like cliffhangers, though, you are not going to like the ending. 400 pages into the story, the climax seems to appear, and then the story ends...for now...

So yes, fans of H.P. Mallory and paranormal romance are going to enjoy this book. I definitely did and look forward to the second installment coming out this fall. 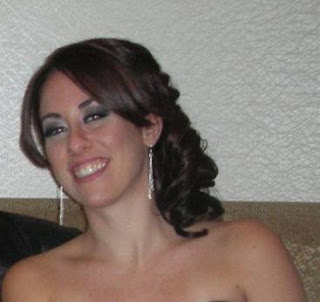 I was born in Philadelphia, PA and grew up in the suburban outskirts of this amazing city. I love anything paranormal and/or supernatural - seriously I live in Philadelphia! For those of you who don’t know, this city is an awesomely haunted place! This healthy paranormal addiction has provided me the motivation to write my first book, “I’ll Be Damned.”

I graduated from Drexel University with a Bachelor's Degree in Psychology and I'm currently working on the Anna Wolfe Series.

a Rafflecopter giveaway
Posted by Andi at 5:00 AM